Article
Edge of the Empire arrives on DVD in April 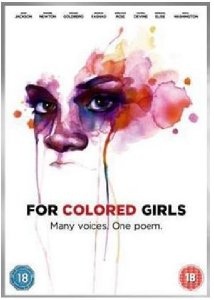 An incredible all star cast unite for Tyler Perry's adaptation of a landmark 1970's "choreopoem" and award-winning Broadway smash hit. FOR COLORED GIRLS stars THANDIE NEWTON, JANET JACKSON, WHOOPI GOLDBERG, MACY GRAY, KERRY WASHINGTON, KIMBERLEY ELISE and PHYLICIA RASHAD and will be available to own on DVD along with extra special features, from 4th April 2011 (RRP £15.99).

Ntozake Shange's celebrated choreopoem 'For Colored Girls Who Have Considered Suicide When The Rainbow Is Enuf' became a Tony Award-winning hit on Broadway in the 1970's. This complex piece draws 20 different but complimentary stories together all on the theme of being a woman of colour in today's world.

FOR COLORED GIRLS is a powerful story, weaving together the lives and issues of many different women as they move in and out of each other's existences. Some are known to each other, some are strangers but heartbreak, crisis, crime and love will ultimately bring them together.