DVD
They Came From Beyond Space
Related Articles 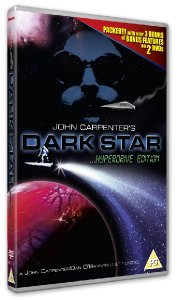 Fabulous Films are pleased to announce

Available to buy from 28th February 2011


The 2011 Hyperdrive Edition has been  sourced from a new 16x9 35mm
transfer with additional frame by frame digital restoration of the video master
to provide the best picture ever seen! The soundtrack has also been digitally
enhanced and restored to Dolby Digital 5.1

Packed with over 3 hours of bonus features on 2 DVD's, including a brand new
documentary , "Let There Be Light: The Odyssey of Dark Star".

Synopsis
John Carpenter's pulp science fiction classic - this brilliantly clever and funny parody of Stanley Kubrick's 2001: A Space Odyssey follows a warped intergalactic mission to blow up unstable planets. Four bored astronauts fill in time between missions catching up on their tans with the help of a sunlamp, playing with a suspiciously plastic looking alien mascot they are taking back to earth, and conversing with their female version of Hal. Things start to go horribly wrong as the spaceship computer misfires...

Originally running 68 minutes, before 15 minutes of extra footage were shot and the film was released theatrically, the new release contains the original shorter version, the longer theatrical version, and extra features!