DVD
Room at the Bottom - The Complete Series

Blu-ray
The Professionals : Mark I

DVD
Lemon La Vida Loca - All Of It

Article
Airwolf: The Movie comes to DVD and Blu-ray this February 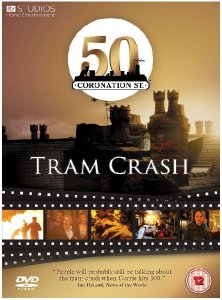 The week that changed everything

'People will probably still be talking about the tram crash when Corrie hits 100."
Ian Hyland, News of the World

Arriving on DVD due to enormous public demand, all six episodes from the explosive week that marked Coronation Street's 50th Anniversary will be released on a two-disc box set from 21st February 2011, courtesy of ITV STUDIOS Home Entertainment.

In December 2010 Coronation Street celebrated its fiftieth anniversary with an extraordinary week of episodes that gripped the nation and featured the spectacular tram crash, followed by the highly dramatic and emotional aftermath. Life on television's most famous street will never be the same again...

This very special DVD set includes every episode from that extraordinary week of drama, including the historic hour-long live episode, as well as a host of fabulous extra features, making the double-disc DVD a must for any fan of Corrie.

ITV STUDIOS Home Entertainment is the consumer label within ITV Studios Global Entertainment. It is the company behind one of the UK's most comprehensive film and video collections with over 3000 titles and is a major player in the UK and International Home Entertainment Market. The range includes titles in contemporary and classic film (Shawshank Redemption, Fabulous Baker Boys, Brief