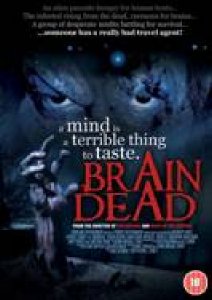 An alien parasite hungry for human hosts...
The infected rising from the dead, ravenous for brains...
A group of desperate misfits battling for survival...
SOMEONE HAS A REALLY BAD TRAVEL AGENT!

Two ESCAPED CONVICTS, two VERY ATTRACTIVE lost hikers, a TELEVANGELIST and his PRETTY, YOUNG assistant all find themselves in the unusual (except in horror films) predicament of being trapped in a deserted fishing lodge with a host of alien-infected, mutant amoeba controlled ZOMBIES at their doorstep.

A random meteorite falls to earth and accidentally hits BILL, a small town fisherman, in the forehead, leaving a marble sized wound in his skull. As his friend and fellow fisherman, BEN, tries to help him, the meteorite dissolves into an oil-based, gelatinous alien life form which seeps into Bill's BRAIN, turning him into a CANNIBALISTIC ZOMBIE! Bill's eyes then snap open and he attacks his friend, ripping Bob's BRAIN from his SKULL and devouring it.

A while later Sydney Moyes, a local FOREST RANGER, finds the remains of one of the fisherman from the lodge and investigates, leading to a VIOLENT GUNFIGHT with Bob. Sydney gets the drop on Bob but before she can shoot him a MONSTROUS, humanoid creature attacks her and devours her brain.

When they discover the missing fishermen have been MURDERED and DECAPITATED, the disparate group are forced to put aside their differences and to work together to try and escape. With ALIEN controlled ZOMBIES stalking the woods the shelter they sought earlier may now become their TOMB.

"A blast. Everything good about 80s horror is here." Screamtv.net

SPECIAL FEATURES:
- "Behind the Screams" making of featurette