DVD
The House by the Cemetery: Masters of Giallo

The Beyond Blu-ray and DVD specs announced 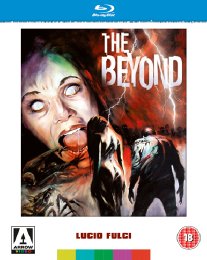 ONLY DEATH AWAITS IN THE BEYOND!

If your new business venture is sited on the cursed gateway to the hell dimension of The Beyond, then maybe it's time to move elsewhere but Liza (Catriona MacColl) is determined to make her New Orleans hotel work, until strange things start happening, people vanish and her waking thoughts are haunted by a ghostly blind woman who seems to hold the answers to the whole bizarre fever-dream. As reality breaks down and the plot explodes, Liza must journey far from everything she understands and descend in The Beyond...

The Beyond is Fulci's Zombie masterwork as he assaults his audience with shock after head spinning shock, all the while leading up to one of horror cinemas most heart stopping finales. The Beyond drives sane men mad and leads others to murder. Dare you step over to the other side?

4 option reversible sleeve with original and newly commissioned artwork
Double-sided fold-out poster
Collector's booklet featuring an introduction to the film by Eli Roth, director of 'Cabin Fever', 'Hostel' and 'Hostel Part II', 'Beyond Bombast' and an interview with Al Cliver by author and critic Calum Waddell as well as reprints of original Lobby Cards, stills and behind the scenes photographs from the collection of star David Warbeck.
Brand new HD restoration of the feature presented completely uncut

In original aspect Ratio 2.35:1 (16x9) anamorphic with English 5.1 DTS-HD Master Audio (on the Blu-ray), English 5.1 Dolby Digital (on the DVD) and original English and Italian mono audio options (on DVD and Blu-ray)

Release date: 14th February, 2011 so perfect viewing for Valentine's Day -- or maybe not!