DVD
The Legend of Bruce Lee

Article
The Royle Family return in Joe's Crackers this January 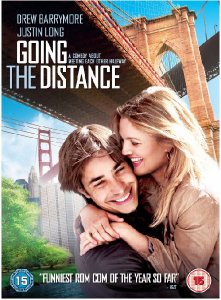 DO THEY HAVE WHAT IT TAKES?

'A date movie with some real punch' - Radio 1

'Going the Distance' follows Erin and Garrett as they meet by chance in New York City and spark a fully-fledged summer fling. Neither expects it to last knowing Erin has to head home to San Francisco and Garrett has to stay behind, but after six weeks together in the city, they aren't sure they want it to end. And while Garrett's friends pick on him for his full-time relationship with his cell phone, Erin's highly strung sister is trying to shield her from going down this long distance path. However, despite the time zones and the nay-saying friends and family, Erin and Garrett might just have what it takes to go the distance.

Erin's (Drew Barrymore) wry wit and unfiltered frankness charm newly single Garrett (Justin Long) over beer, bar trivia and breakfast the next morning. Their chemistry sparks a fully-fledged summer fling, but neither expects it to last once Erin heads home to San Francisco and Garrett stays behind for his job in New York City. But when six weeks of romping through the city inadvertently become meaningful, neither is sure they want it to end. And while Garrett's friends Box (Jason Sudeikis) and Dan (Charlie Day) joke about his pre-flight calorie-cutting, they don't like losing their best drinking buddy to yet another rocky romance. At the same time, Erin's overprotective married sister, Corinne (Christina Applegate), wants to keep Erin from heading down an all-too-familiar road.

But despite the opposite coasts, the opposing friends and family, and a few unexpected temptations, the couple just might have found something like love, and with the help of a lot of texting, sexting and late-night phone calls, they might actually go the distance.

The 'Going the Distance' DVD contains the following special features: