Article
Flawless: Chase the Dream on DVD this November

Lee Nelson's Well Good Show is on DVD this November 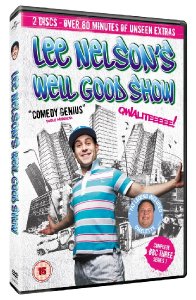 BBC Three's breakout hit comedy series Lee Nelson's Well Good Show is being released on DVD, packed with over 80 minutes of unseen, brand new DVD extras, on 29th November by Universal Pictures (UK). Instantly recommissioned for a second series, the show has been a ratings hit for BBC Three, winning consolidated viewing figures of over 2 million per episode and reaching as high as number two in the BBC iPlayer chart for most-watched show across all BBC channels.

Filmed in front of a live audience, this brand new comedy show for BBC THREE welcomes viewers into the world of the irrepressible LEE NELSON. Join always-loveable south-London tearaway LEE as he fronts Lee Nelson's Well Good Show, getting in amongst the studio audience to entertain them with cheeky banter, tales of mischief-making, and all manner of daft games - assisted by his best friend, 'fat legend' Omelette.

In between the studio-based chaos, LEE takes time out to introduce the audience to some of his favourite TV shows including '110% Bent' with preening footballer Jason Bent, one of the Premier League's brightest talents, who allows viewers 110% access to his life in fly-on-the-wall documentary, 'Hospital Life' with bungling medic Dr. Bob, who puts the fun back into fungal infections taking us behind the scenes at one of Britain's worst performing NHS hospitals and 'Faliraki Nights', which sees unhinged holiday rep Chris Young give Brits abroad the time of their lives in this bottom-of-the-barrel exposé on the Faliraki holiday scene.

Memorable moments from the series include; Jason Bent on 'Match of the Day' with ADRIAN CHILES and LEE DIXON, gurning Grannies on 'Old People Do Fun Stuff', Doctor Bob's tips for 'Breaking Bad News', mud wrestling 'women in bikini's' in 'Omelette's Peer Pressure Challenge,' holiday rep Chris Young's rowdy Faliraki bar crawls, LEE'S Nan's interpretations of top chart bangers from DIZZEE to MC HAMMER and outrageous audience games such as 'How Many People Have They Banged?'

The DVD is crammed with over 80 minutes of unmissable, never seen before DVD extras including; Lee's Top 10 Chat Up Lines, 'What Happened in the Disabled Toilets', Exclusive Footage of Lee in the Studio, DVD Commentary from Lee and Omelette, Behind the Scenes on Lee's Live Tour, Deleted Scenes from Jason Bent and Dr Bob, 'Old People Doing More Fun Stuff,' hilarious out-takes from the whole series and much more! LEE NELSON is currently on a full UK tour which has been extended from 41 to 61 dates, including 5 dates in London, due to meet demand for tickets.

So brace yourselves for some 'well good' fun asLEEunleashes his anarchic brand of good-natured ribbing, dubious life lessons and general scallywaggery. Qualiteeeee!