You remember Gantz don't you? It was that anime full of sex and violence, aliens and cyberpunk technology, which made a real effort in being boring. It was the one where characters would stand around and debate for hours instead of fleeing from the psychopathically brutal alien, while the psychopathically brutal alien would be kind enough to pause to let them have their conversation, before coming and slicing bits of them off. It was a perfect example of what could have been, and it's lucky then that it has a second chance to get it right, this time in a live action movie. Or rather it turns out, in two live action movies.

The latest trailer is here to peruse. The film is due out next year.

The Berserk anime had the biggest non-ending to an anime series in history, just stopping dead after 25 episodes of setting the scene and building the characters. In many quarters it is seen as one of the finest anime ever made. But the manga creator Kentaro Miura isn't the most prolific of artists around. Since the story began some 20 years ago, he's barely released 34 volumes of manga. The anime that was released 14 years ago barely served as the prologue to the main story, and 'More Berserk' has long been a plea on many an anime fan's wish list. Now it seems that that wish may be one step closer to being fulfilled. The most recent volume of manga has an advert for a forthcoming anime adaptation of Berserk on it, a new adaptation. More than that, the Young Animal website has trailers.

Click the link to get a look at the first new Berserk anime in over a decade. And remember not to get excited. There's no word as yet as to whether it's a continuation, remake, full series, or just an OVA. 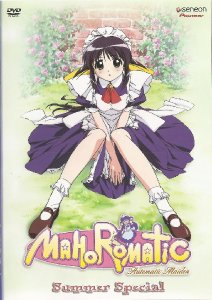 Last week's reviews began with the most pointless review yet, but since I wrote it, you get it anyway. Not realising that MVM would include the Summer Special OVA on the Mahoromatic: Something More Beautiful final volume, I went and imported it. A single episode of an anime series on a DVD all by itself isn't the greatest economy in the world, but it has the benefit of being a very funny 25 minutes of anime, as a hapless teen male tries to hide his porn collection from his disapproving robotic maid. There's no need for you to import this, as you can get it in the UK. But it is an object lesson in just how anime companies used to treat anime fans once upon a time. Click for the review of Mahoromatic Automatic Maiden: The Summer Special OVA. 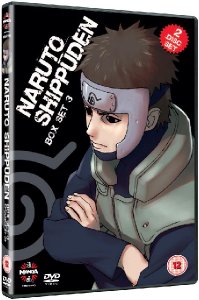 Then it was the turn of Naruto Shippuden: Box Set 3. I really ought to assign some blurb for this show to a function key. We all ought to know the blah by now, little orange ninja, nine-tailed fox demon, Sasuke, Sakura, Orochimaru, Akatsuki, and an anime that looks right now as if it will never, ever, end. Not that that is a bad thing, as legions of Coronation Street fans can attest to. This third volume sees the end of the rescue Gaara arc, and the start of something new, as Naruto and friends try and capture a spy in Orochimaru's organisation, who may have knowledge of where Sasuke is. I say Naruto and friends, but they've got a couple of new recruits, and while acting Captain Yamato may be friendly enough, Sai is the sort of ninja who inspires thoughts of murder in both Sakura and Naruto. 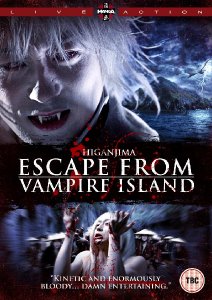 Finally it was all wrapped up with a look at a live adaptation of a long running manga story. Higanjima - Escape From Vampire Island isn't the latest Snake Plissken movie. Would that it were. No, this is one of those 'band of teenagers venture into a situation that they ought to avoid' movies. Higanjima is an island full of vampires. Akira and his friends go there to rescue his older brother. But it's so chock full of vampires that they wind up having to escape. The clue's in the title really. Click on the review to see if this movie manages to give you something that Twilight doesn't. If it manages to stop pre-teen girls from screaming themselves giddy, then that can only be a good thing.
Geneon released the Mahoromatic OVA years and years ago. The company is long gone, but the discs are still available to buy. There's an object lesson there. Naruto Shippuden: Box Set 3 and Higanjima - Escape From Vampire Island are both out today, and both courtesy of Manga Entertainment.