Blu-ray
In the Electric Mist

The Killer Inside Me hits DVD and Blu-ray in September 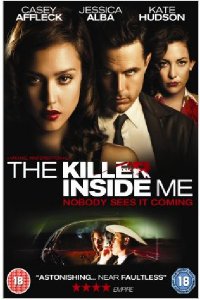 THE KILLER INSIDE ME

Michael Winterbottom's faithful and superbly crafted adaptation of legendary pulp writer Jim Thompson's novel The Killer Inside Me will be released on DVD and on Blu-Ray for the first time on September 27.

Suspicion begins to fall on Lou, and it's only a matter of time before he runs out of alibis. But in Thompson's savage, bleak, blacker than noir universe nothing is ever what it seems, and it turns out that the investigators pursuing him might have a secret of their own.

The Killer Inside Me is an seamless adaptation of one of the great psycho-noir novels and a chilling exploration of the mind of a killer that will stay with you long after viewing.

The novel of The Killer Inside Me by Jim Thompson is available in paperback (Orion; £7.99).