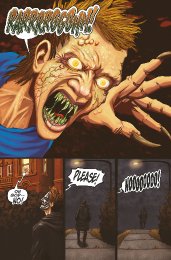 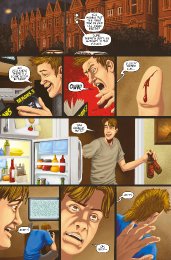 THE ORIGINAL DEMON ZOMBIE CLASSICS - DEMONS & DEMONS 2 ARE JOINED BY THE ALL-NEW DEMONS 3!

Arrow Video are proud to announce that in 2010 they will bring to DVD all-new transfers of the classic Dario Argento produced and Lamberto Bava directed horror classic - Demons and Demons 2. Included within each DVD package will be all-new extra features specially shot for the releases plus a two-part comic book sequel - Demons 3!

"Live and direct, straight from HELL!"

Lamberto Bava and Dario Argento bring you THE Gonzo Horror movie of the 1980s with Demons, a frenzied slice of gore heavy shock cinema that gives up on logic and instead assaults the screen with a riot of X-Rated violence, face chewing Zombies and pounding Heavy Metal.

In a mysterious cinema, an audience are watching a brutal horror flick when the horror rips out of the screen, unleashing a swarm of slathering Demons who are intent on spreading their evil plague across the globe.

Time to tool up and take no prisoners... The Demons are coming!

THIS AMAZING EDITION OF DEMONS INCLUDES:

DEMONS 3: Not 'The Ogre'. Not 'The Church'. Not even 'Black Demons'! For the first time ever, Arrow Video present an original sequel to the cult classics. It is the 16th Century, the time of the plague in Southern France. Amid the carnage, a new evil is starting to take form and only one man can see it. That man is Nostradamus, but are his horrid visions of the future signs of what will come to pass? Can he stop the Demons from entering into our world? An all-new epic tale of demonic dismemberment brought to you from the writing team of Stefan Hutchinson and Barry Keating, with artwork by Jeff Zornow and Marcus Smith!

Please note that a release date and RRP has yet to be decided.