DVD
Away We Go 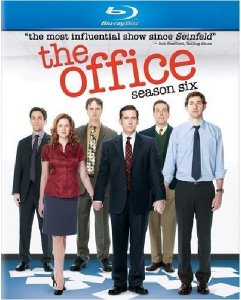 Return to Television's Most Hilarious Workplace for Another Unforgettable Season of Outrageous Office Shenanigans
on Blu-Ray™ Hi-Def and DVD!

Available on September 7, 2010 with Hours of Bonus Features
Including an Exclusive Version of the Original Minisode "Podcast!"

Universal City, California, June 2, 2010 - Hailed as "the most influential show since Seinfeld" by Rob Sheffield of Rolling Stone, "The Office" Season Six arrives on Blu-ray™ Hi-Def and DVD on September 7, 2010 from Universal Studios Home Entertainment. A documentary-style look at the lives and loves of paper supplier Dunder Mifflin's hilariously irreverent employees, "The Office" features a stellar ensemble cast, including Steve Carell in his Golden Globe®-winning and Emmy®-nominated role.

With a landmark season that included everything from romance, marriage and parenthood to promotion, demotion and a ball-busting new boss (Oscar® winner Kathy Bates), "The Office" continues to be "one of the best comedies on television" (Alessandra Stanley, The New York Times). Now fans can own all 26 season six episodes on Blu-ray™ or DVD in this multi-disc collectible set that features more than eight hours of uproarious bonus features including the minisode "Podcast," deleted scenes, commentaries, behind-the-scenes interviews and two never-before-seen extended episodes.

BONUS FEATURES EXCLUSIVE TO Blu-rayTM:Unleash the power of your HDTV with perfect picture and the purest digital sound available.

"The Office" Season Six on Blu-ray™ and DVD comes with hours of bonus features, including:
· "Podcast" Minisode: In the exclusive version of the minisode "Podcast," Gabe (Zach Woods) tries to impress corporate by recording a podcast for the Sabre website. However, his plans for a small meaningful, profile of Kevin (Brian Baumgartner) quickly unravel as the rest of the office forces Gabe to become the reluctant host of a late night style talk show.
· Welcome to Sabre Featurette: Full-screen version of the corporate welcome video starring
Kathy Bates and Christian Slater
· Episode Commentary: Commentaries featuring the cast and crew of The Office on episodes such as "The Promotion," "Niagara," "The Lover," "Murder," "Secret Santa," "Sabre," "The Delivery" and "Happy Hour."
· More than Two Hours of Deleted Scenes
· Two Extended Episodes
· Blooper Reel
· The Office Promos: Dwight's Tribute to Canada