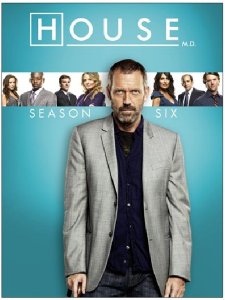 "Possibly the cleverest, wittiest drama on TV" - Boyd Hilton HEAT
"Love him or hate him, Dr Gregory House is irresistible" - The Times
"A witty treat(ment)!" - Star
"Dr House makes us all feel better" - The Mail on Sunday

Get ready for a full dose of medical mystery as Hugh Laurie is back as Dr. Gregory House in the sixth season of the Golden Globe®-winning and Primetime Emmy® Award-nominated series, House. The hugely successful medical drama from Sky One is now yours to own on DVD and Blu-ray from 27th September 2010 from Universal Playback - the first season of this award-winning series to be presented on Blu-ray format.

In this brilliant sixth season, House finds himself in an uncomfortable position - away from the examination room. As he works to regain his license and his life, his co-workers deal with staff shakeups, moral dilemmas and their own tricky relationships with House. Featuring an outstanding supporting cast including Omar Epps ("ER"), Olivia Wilde (Tron), Lisa Edelstein ("The West Wing"), Jesse Spencer (Uptown Girls), Peter Jacobson (Transformers), Jennifer Morrison (Star Trek), and Robert Sean Leonard, this must-own collection includes all 21 season six episodes complete with riveting bonus features.

House is a medical mystery show that centres on the irreverent Dr. House, a brilliant diagnostician whose unconventional thinking and flawless instincts have earned him a great deal of respect. Join House and his elite team of dedicated doctors and nurses as they race against time to treat patients with strange illnesses before it is too late!

· BEFORE BROKEN (9:53 EST): Featuring Hugh Laurie and shot on location with no script and no plan, experience House's emotional journey at Mayfield Psychiatric Hospitable from an all-new up close and intimate perspective as originally envisioned by Director/Executive Producer Katie Jacobs in a never-before-seen original short.

NEW FACES IN A NEW HOUSE (6-8 MINUTES): "Broken",the 2-part episode, which kicked off Season 6, featured none of the regular stars of HOUSE other than Hugh Laurie. In this featurette we'll discuss the challenges and opportunities that are presented when a show must hire more than 30 new actors to perform pivotal roles in an extremely important episode.

Available U-CONTROL features on this Blu-ray disc:
Ø A BEGINNER'S GUIDE TO DIANOSTIC MEDICINE