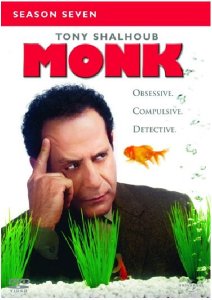 Obsessive. Compulsive. Detective.
Get ready to join forces with San Francisco's most unusual detective with the DVD release of Monk: Season Seven, available from 23rd August 2010 courtesy of Universal Playback.

Despite his photographic memory and his amazing ability to piece tiny clues together, Monk is now on psychiatric leave from the San Francisco Police Department, aided by his personal assistant and practical nurse, Sharona Fleming (Bitty Schram). Refusing to give up on his career, Monk works freelance as a detective, hoping to convince his former boss, Captain Stottlemeyer (Ted Levine), that he is able enough to return to the force. Stottlemeyer wavers between admiration for Monk'swork and annoyance at his eccentricities.

With the perfect blend of crime and impressive acting, get ready for a sympathetic yet comedic look at the life of a man like no other.