Prince of Persia: The Sands of Time hits Blu-ray and DVD in September 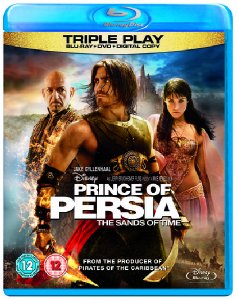 Walt Disney Studios Home Entertainment proudly presents the most exhilarating, fun filled and entertaining action adventure of the year, PRINCE OF PERSIA: THE SANDS OF TIME, on Disney Blu-ray, DVD and Download. Packed full of special interactive features and exclusive unseen footage, this is a must have film for the whole family!

From the team that brought the "Pirates of the Caribbean" trilogy to the big screen, Walt Disney Pictures and Jerry Bruckheimer Films invites audiences on a thrilling voyage set in the mystical lands of Persia. Filled with death-defying escapes and unexpected twists at every turn, it's a race against time for rogue prince (JAKE GYLLENHAAL) who reluctantly joins forces with a mysterious princess (GEMMA ARTERTON) to safeguard an ancient dagger capable of releasing the Sands of Time. The enchanted dagger is a gift from the gods that can reverse time and allow its possessor to rule the world.

Available in Blu-ray, DVD Double Play and Download, PRINCE OF PERSIA: THE SANDS OF TIME allows the audience to get closer to Jake Gyllenhaal and Gemma Arterton and experience the phenomenal action and magical quest in enhanced high definition and sound. Viewers can be treated to deleted scenes exclusive to the home entertainment release that reveal hidden secrets to the characters and the adventure along with their very own inside scoop from the filmmakers and actors on the making of the film.

Directed by Mike Newell ("Harry Potter and the Goblet of Fire") and boasting an all-star a cast including Ben Kingsley, Alfred Molina and Toby Kebbell, PRINCE OF PERSIA: THE SANDS OF TIME is a widely entertaining, fun filled adventure that will keep your pulse pounding long after the credits end.

The exclusive interactive features allow you to:
· CineExplore and take control of the dagger and use it to unlock secrets behind your favorite scenes!
· Turn back time and uncover over 40 spellbinding segments - including "Walking Up Walls", "Filming in Morocco", and "Ostrich Jockey Tryouts"
· Watch the deleted Scene: The Banquet - Garsive Presents Heads
· Discover an unseen world with the making Prince of Persia

Adopted from the streets of Nasaf by King Sharaman of Persia, young Dastan (Jake Gyllenhaal) grows up amongst royalty and quickly earns his place as a mighty warrior and prince. As his brothers Garsiv (Toby Kebbell) and Tus (Richard Coyle) plan battle strategies, a spy sends word that the Holy City of Alamut has been supplying weapons to enemies of Persia. Taking matters into his own hands, Tus orders an attack on the sacred city and upon its fall Dastan encounters the beautiful Princess Tamina (Gemma Arterton). When King Sharaman dies under mysterious circumstances shortly after, and Dastan is accused of his murder, he flees with the princess on a harrowing mission to clear his name. Learning from Tamina the true motives behind Alamut's invasion, Dastan must embark on a perilous quest to stop an evil mastermind's plot for ultimate power with a mystical weapon that can control the very fabric of time.

About Disney's Double Play and Tripe Play packs:
To provide consumers with unprecedented quality, value and portability of their favorite Disney classics, in 2008 WDSHE pioneered the Double Play Pack - a Blu-ray Disc plus a DVD and in the cases of Triple Play pack, a Digital Copy of the movie in a single package. Current 2010 Disney titles available as Disney Double Play Packs include Up, Toy Story, Toy Story 2 and later in the year Princess and the Frog.