Animals out on DVD in August 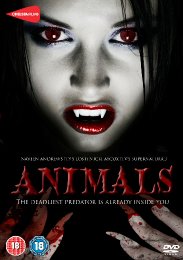 THE DEADLIEST PREDATOR IS ALREADY INSIDE YOU

Based on the best-selling 1992 novel by John Skipp and Craig Spector (who co-scripted 'A Nightmare On Elm Street 5: The Dream Child' and are regarded by many as key pioneers of the late-1980s literary splatterpunk movement), Animals comes to the screen as a full-blooded, no-holds-barred adaptation that mixes sex and horror in equal measure.

Ever since his dreams of a promising football career were shattered by an unexpected injury in college, one-time local hero Jarrett (Blucas) has spent the subsequent years wasting away in his rapidly dying hometown working days in a variety of dead-end, blue collar jobs and idling away his evenings in the local bar. While drowning his sorrows after being fired from his latest job following a run-in with his boss, Jarrett's humdrum existence takes an unexpected turn when he meets and is seduced by a sensuous young woman, Nora (Aycox), who is passing through town. Their reckless night of unbridled passion results in Jarrett experiencing strange primal impulses and heightened sensations, not least of which is his intense carnal attraction towards Nora.

The sudden change in Jarrett's personality causes immediate concern for his best friends, barmaid Jane (Amurri), who has a secret crush on him, and bar owner Jules (Andy Comeau). But their concerns are nothing compared to the problem Jarrett is about to face with the arrival of Nora's former lover, Vic (Andrews), a volatile, bloodthirsty predator with whom Nora shares a terrifying bond. As Jarrett's involvement in this deadly triangle of lust and bloodshed begins to threaten his very humanity, only Jane holds the key to unlocking the strangers' secret and ensuring her friend's survival.