Blu-ray
John Dies At The End 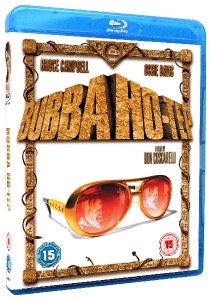 THE KING OF ROCK 'N' ROLL VERSUS THE KING OF THE DEAD ON BLU-RAY FOR THE FIRST TIME ANYWHERE!

Something very strange is going on at the Shady Rest Retirement Home in Mud Creek, Texas. It is the present day, and the King of Rock 'n' Roll (Bruce Campbell) is quietly living out his twilight years in the company of fellow resident, former US president John F. Kennedy (Ossie Davis). Contrary to popular belief, JFK managed to dodge the assassin's bullet but in the aftermath had his skin dyed black and his head messed with by "Them" at the White House. But that's not half of it. According to the former president, there's a malevolent Egyptian mummy on the loose in the halls of the home intent on devouring the residents' souls. Reluctant to take this evil threat lying down, Elvis and JFK decide it's time to kick some mummy ass! Armed with just a Zimmer frame, a wheelchair, a makeshift flamethrower and some dubious karate moves, the decrepit duo set about taking care of business…

Bubba Ho-Tep features a remarkable show-stopping and career-defining performance by Bruce Campbell as Elvis, described by both the Hollywood Reporter and Daily Variety as one of the best screen interpretations of the King to date. One of the most original and touching genre films you will ever see, Bubba Ho-Tep is a must-see film and an essential addition to the Blu-ray collections of all Bruce Campbell and Elvis fans.

I remember buying this from DVDSoon as a R1 import for about £5 & laughing my head of on the Friday night weekly commute home with it (aided & abetted by some cans of Fosters (Gawd I miss that beer, but have something better here) on my portable DVD player & enjoying the music track "All is well\The Heros Hallway" or whatever it's supposed to be called.

It's definately one of those movies that you get if your mind is a little warped enough to believe Elvis faked his own death & JFK had his death faked & his skin dyed black.  Oh yes & allegedly Cleopatra....... [Spoilers!!!!] ohh watch the movie & find out.
posted by Rassilon on 7/7/2010 03:18
It's quite a slowly paced movie I thought, Cambells performance as Elvis is just awesome though. And an enjoyable film.
posted by Reviewer News on 7/7/2010 09:54