The Expo has hit, leaving a trail of news carnage for me to sift through. Everyone was there, although that doesn't mean as much as it used to, as it really just boils down to Beez, Manga, and MVM. ADV were there for one final time, one last grand clearout of their stock, and one chance to give away those anime goodies to those eager collectors with rose tinted spectacles of how things used to be. Of course, me being a lazy get, I stayed home to write up a Bleach review, and am relying totally on Anime UK News, Twitter, and UK Anime.net to glean just who said what.

For MVM, it was just a case of confirming their existing licences, which are plentiful enough to fill a year's worth of DVD releases anyway. In the immediate future, you can look forward to Mahoromatic: Something More Beautiful beginning in June, Rozen Maiden: Traumend in July, and Pet Shop of Horrors in August. The live action Samurai Zombie movie comes out in July as well.

Forthcoming titles yet to be dated in stone include, Moribito: Guardian of the Spirit (possibly September), Blade of the Immortal, Slayers Revolution, and Slayers Evolution-R

News of interest was MVM's announcement that they would begin releasing 2-disc sets, catching up with Beez and Manga.

Beez tantalised us beforehand with whispers of four forthcoming licences, and even offering a prize to who could guess them correctly.

Those four licences are, the predictable Gundam 00 and Gundam Zeta movies, the long demanded Outlaw Star, which will be going straight to the budget Anime Legends label, and the totally out of the blue Durarara!!

Durarara!! is the next series from the creator of the acclaimed Baccano, and is currently streaming on Crunchyroll if you want to have a taste. The thing is that it hasn't yet been announced as a Region 1 licence, which may mean that it will be a UK exclusive (or the US company in question is just sitting on the news). In another first, Durarara!! will be a subtitle only release in the UK, with a hint that a prospective US release will also lack a dub. Expect Durarara!! around the end of the year.

Manga Entertainment had confirmations as well as new licences to play with. Naruto Shippuden begins in June, as does Soul Eater, while August sees the UK debut of Full Metal Alchemist Brotherhood, on both DVD and Blu-ray. Live action titles in August include Kamui, By the will of Genghis Khan, and K20.

New licences and announcements from Manga include, Vampire Knight (single disc) around October, Vampire Knight Guilty, Ghost in the Shell: Stand Alone Complex - Solid State Society on Blu-ray by Christmas, Professor Layton and the Eternal Diva by October, the brilliant Baccano! by the end of the year, and the even more amazing Eden of the East on 2-disc DVD and Blu-ray by November.

Rumours from Manga include hoping to licence Kanon and Bamboo Blade, always trying to get One Piece and Dragonball Z, and not being interested in Sgt. Frog.

And all three players had words about the industry. Beez said that 5000 sales is a good figure for them. Manga said that Ouran High School Host Club had sold 15000 copies. MVM and Manga noted that practically all of the profits from anime go back to the Japanese producers and rights holders. Manga mentioned that the Coroners and Justice Act, the so-called Dangerous Cartoons Act might limit the anime licensed in the UK**. And Manga also said that they are looking into setting up a UK centric anime streaming service with a little i-Tunes assistance.

** Anime UK News forum member Project-2501 contacted the BBFC and learnt that "The BBFC … … have not changed their guidelines as sec 62 of the Coroners and Justice bill does not affect their work. Code Geass was not cut because of recent changes in the law."

And in other news…

For Funimation is up for sale! Their parent company Navarre is looking to potentially offload their profit making anime division. Before a million anime fans cry out in terror, this is potentially a good thing. Funimation, as the biggest anime distributor in the US is on an economy defying upward trend, and at the moment is looking to solidify its position by going into anime production. They want to co-produce anime, bringing US stories to the anime world, much as Marvel has done in recent years with their Iron Man, Wolverine, and Heroman collaborations. Navarre is primarily a software firm, with an interest in distribution, and as long as Funimation were all about the distribution, it was a match made in heaven. Now Funimation probably needs Production Industry backing, something a little more Entertainment oriented, which is why Navarre is looking for a more appropriate partner for Funimation. So if you have a few tens of millions, and more importantly the right contacts, you might want to put in a bid. Anime News Network has interviewed Funimation's CEO Gen Fukanaga, so you can get the skinny straight from the horse's mouth. 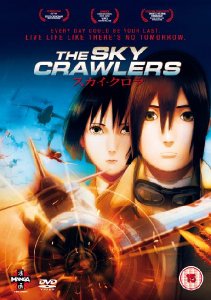 The reviews this week began with one of the most anticipated anime feature films of the year, Mamoru Oshii's The Sky Crawlers. Oshii is the prodigious talent behind Ghost In The Shell and Patlabor, and not forgetting a couple of the Urusei Yatsura films. A Mamoru Oshii movie is guaranteed to get your brain cells tingling, as he presents worlds and ideas that appeal to those who look for more from their anime than action and fan service. The Sky Crawlers offers depths that the average anime eschews, it looks at what defines the soul, asks questions of philosophy, of thought… and it's got some really cool aerial dogfights and some cute girls as well. Some things are eternal. 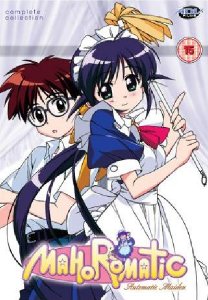 I then cast my gaze over the late lamented ADV's collection of Mahoromatic: Automatic Maiden. This one doesn't have any pretensions of higher purpose, it doesn't purport to offer you the meaning of life. It's about a young orphan boy named Suguru, and his live-in android maid Mahoro. It's from Gainax and Shaft, it's got an alien war back story, and it's got lots of perverted anime antics, the sort that gets Daily Mail readers' knickers in a twist. It's a must buy for that reason alone. 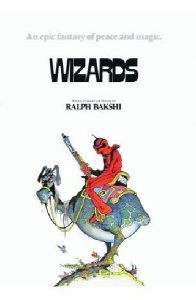 Last week, David Beckett looked at the Blu-ray of Wizards. Well this week it's Curtis Owen's turn to review Ralph Bakshi's Wizards, but this time in DVD form. You can't say that you lack for rounded and detailed analysis on this site. Click on Curtis' review to see what he made of the cutting edge animation from 1977. 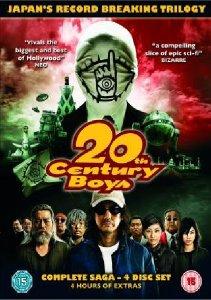 I then rounded off the week with the 20th Century Boys Trilogy. This live action adaptation of Naoki Urasawa's manga had its first instalment released last year, but since then, it seems that the world had forgotten all about it. It may annoy early adopters, but we now get the whole thing in one convenient, and cheap collection, and this generations spanning story of conspiracies, doomsday cults, and pop culture can be appreciated all in one go. You can see if the wait has been worth it by clicking on the link.

Today sees the release of Sky Crawlers from Manga Entertainment in both DVD and Blu-ray form. You can also pick up the 20th Century Boys Trilogy today courtesy of 4 Digital Asia, while Eureka's Wizards was released last Monday. ADV released the Mahoromatic: Automatic Maiden collection with practically their dying breath back in 2009.