Action thriller Armored hits DVD and Blu-ray in May 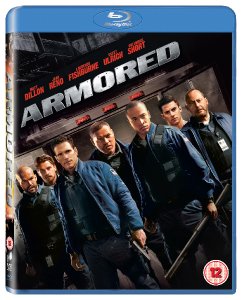 Revving Up On Blu-ray™ and DVD on May 31

After keeping audiences on the edge of their seats in cinemas, ARMORED is now equipped to thrill like never before on Blu-ray™ and DVD, featuring stunningly clear picture and sound that puts viewers smack in the middle of the action. Plus, both the DVD and Blu-ray™ versions contain great bonus features fans won't want to miss!

Bonus features on the ARMORED Blu-ray™ and DVD include producer and cast commentary, along with the making-of featurettes "Planning the Heist: Making Of," featuring cast and crew interviews; "Crash Course: Stunts," spotlighting the choreography behind the film's breakthrough action sequences; and "Armed and Underground: Production Design," revealing how the filmmakers achieved the film's uniquely gritty look! Bonus features exclusive to the Blu-ray™ edition include the BD-Live™ enabled movieIQ+sync™, which lets viewers access live information about the cast, crew, music and production trivia of ARMORED - all while watching the movie! Viewers can also getthe full movieIQ™ experience on their computer or iPhone by linking to their Blu-ray™ player!

Synopsis
Matt Dillon, Jean Reno and Laurence Fishburne star in the explosive action thrill-ride ARMORED. A crew of officers at an armored transport security firm risk their lives when they embark on the ultimate heist... against their own company. Armed with a seemingly fool-proof plan, the men plan on making off with a fortune with harm to none. But when an unexpected witness interferes, the plan quickly unravels and all bets are off.

ARMORED marks the screenwriting debut of James V. Simpson. It was produced by Joshua Donen (upcoming Priest, Drag Me to Hell) and Dan Farah (The Legend of Awesomest Maximus, Visioneers) and executive produced by Debra James (The House Bunny, Next) and Russell Hollander (Good Luck Chuck, Malibu's Most Wanted). It co-stars Fred Ward (Sweet Home Alabama) and Milo Ventimiglia (TV's "Heroes"). It was released by Screen Gems and has a run time of approximately eighty-four minutes. It has been rated 12.


Blu-ray™ & DVD Bonus Features
Only available on Blu-ray™
Artwork and digital clips are available for download at www.sphepublicity.com Visit Sony Pictures Home Entertainment on the Web at www.SonyPictures.com The Blu-ray Disc version of ARMORED is BD-Live enabled, allowing users to get connected and go beyond the disc via an Internet-connected Blu-ray player. Download content, give feedback through an exclusive survey, and register for rewards.