DVD
Jackass: The Movie (Widescreen) (US)

Article
The Littlest Hobo finally arrives on DVD in April

Gumball 3000 out on DVD and iTunes this April 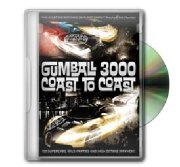 Gumball 3000 'Coast to Coast' is a high speed action packed adventure full of high jinx antics filmed during the eight days of the 2009 Gumball Rally from Los Angeles to Miami. From 'sandal skating and donuts on the freeway' to wild penthouse parties, this road trip offers viewers a unique passenger ride experience on the worlds most exclusive road trip, available on DVD and iTunes on 26th April.

The first Gumball 3000 took place in April 1999, when founder Maximillion Cooper invited 50 friends to take part in a 3000-mile party around Europe to bring together the music, film, fashion and sport industries. Ten years later, and things have certainly grown, with crowds of over million people attending the rally last time in Europe, and a televised and online audience that reached over 60 million in over 100 countries.

Incorporating a new 3000 mile route each year, the attraction of the Gumball 3000 transcends social barriers, appealing to the adventurer in everyone, regardless of status or wealth; combining grease, glamour and guts in equal measures, stretching the experiences of travel and entertainment - just that bit further. Over the past 10 years Gumball 3000 has been hosted by Kings and Presidents, partied with Snoop Dogg, appeared on the Jay Leno Show, raised awareness for testicular cancer, chartered the worlds 3 largest aircrafts, created untold amounts of 'Jackass' fuelled mayhem, hung out at Hugh Hefner's, and most recently has been invited to work with the United Nations, all through the language of the motor car.

Go to www.gumball3000.com for the latest news, reviews, videos, apparel, art, blogs, street culture and everything automotive for the Gumball generation.