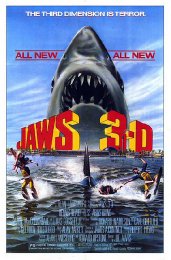 Article
3D Movies - The Gimmick That Will Not Die

Article
A Solution to the Remake 'Problem' 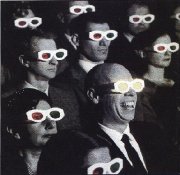 As more and more filmmakers decide to try their hand at stereoscopic entertainment, the more and more sick of 3-D I become. What was once a novelty, where only one screen in my local Cineworld would have a 3-D film, where you pay extra money for the glasses and to go in the cinema's kitty for having installed the projector in the first place, has now become almost the mainstream in cinema entertainment. It isn't as if more filmmakers are choosing to shoot in 3-D, it's just that more distributors see the cash value in releasing their film in a stereoscopic format. 3-D is indisputably profitable as, per screen, a 3-D film will beat a 2-D screening hands down. This leads to the rather bizarre creation of a computer program that adds an extra dimension in postproduction to a 2-D film and I just don't buy it.

The last straw was Tim Burton's adaptation of Lewis Carroll's books Alice's Adventures in Wonderland and Through the Looking Glass which was shot in 2-D but then retrofitted so it could be released in 3-D. The way that cinema's work is to give the bulk of the showings to the 3-D version so you have to go out of your way to see the film in the version that the director intended. If cinemas went pricey enough, an evening ticket for an adult is over £6 and that's without the 3-D surplus of £2.10; 3-D has made in evening's entertainment for a family an extortionate affair. The rationale behind this extra charge is a 3-D film is classified as 'premium', rather than a 'normal' film. This is blatantly not the case any more as, to take one example, Clash of the Titans is only being shown in 3-D so the option to watch the film in 2-D is not there -- 3-D is therefore not premium, but the standard option.

This would be fine if 3-D actually added anything to the experience of seeing a film on the big screen, but it just doesn't. In many cases the 3-D works to the detriment of the film, changing the focus so that objects that would be sharp and in focus are now fuzzy because the computer program's artificial intelligence doesn't work like a cinematographer's eye and isn't 100% accurate at knowing exactly where the focus should be.

In the case of Alice in Wonderland, there were several occasions where the 3-D actively took you out of the film as one of the soldiers would stick a lance towards the lens and the 3-D would make it a shoot out of the screen and into the audience, making you turn your head and realising you are not in Wonderland, but in the cinema with a lot of people wearing silly glasses. I don't for one moment believe that this was Tim Burton's intention.

One of 3-D's cheerleaders has been John Lasseter who announced some time ago that he would not make any more films in 2-D and has supervised the retrofitting of Toy Story and Toy Story 2 for 3-D cinematic releases. Out of sheer curiosity, I went along and saw both of these, paying for the privilege at the box office, and realised that 3-D added absolutely nothing to what are already great films. 3-D did not make them any better.

It seems that opinion is split, although the momentum is very much with the 3-D brigade. Martin Scorsese has announced that his next film (The Invention of Hugo Cabret) will be shot in 3-D and other directors are jumping on the 3-D bandwagon. Chief among them is James Cameron who spent millions of dollars to bring his pet project of Avatar to the big screen, only to see it lose out at the Oscars to the micro- budgeted Iraq war drama The Hurt Locker. The success of Avatar was down to a clever marketing campaign based on the supposed immersive quality that only 3-D could offer and there is no denying that it is a very impressive visual film with incredible landscapes that look just as good in two dimensions as in three. Sadly for Cameron, what he ended up with was a 3-D film with 2-D characters.

Those who have come out against 3-D include the film critics Roger Ebert and Kermode and the award-winning director William Friedkin who think that 3-D adds absolutely nothing and works against the viewing experience by being distracting. William Friedkin beautifully summed up the argument against 3-D when he said:

I don't like 3D. I don't believe there is any film that I have seen and loved that would have been improved by a scintilla in 3D. To me, it's just a gimmick. To me, the art of cinema is the same as the art of painting. The artist takes a 2D medium and gives you the illusion of depth. If you look at any of the great paintings, you have the illusion of depth. Which is part of the art. The same with the great movies.

Friedkin's point works well with the failed experimentation into colourising black-and-white films where great movies that were shot in monochrome were put through a process where so-called experts said what colours things were, or guessed what they would have been, and made It's a Wonderful Life into a colour movie. It didn't work and looks awful. 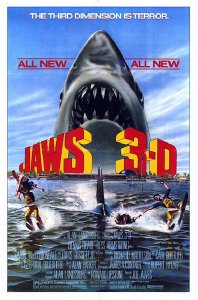 Now before you start thinking I'm a Luddite, I love Blu-ray technology and have bought hundreds of the discs because of the improved visuals, audio options and interactive content that the medium offers. I'm only against 3-D because it seems to me to be a gimmick, something for novelty value and the fact that it is being used as a fairground ride at Universal Studios only confirms this. There have been many occasions in the past where 3-D has been tried and patent applications have been filed as long ago as the 1890s. The difference in previous incarnations of 3-D and what we have now is the technology and the glasses. Whereas the films in the 1980s that are used 3-D technology such as Jaws 3D, Friday the 13th Part 3 in 3D and Amityville 3-D required you to sit in the cinema wearing cardboard spectacles with one red and one green lens to get the effects which, in the case of Jaws 3, had a bizarre shrinking effect which made the giant man eating shark look like some tiny fish you would see swimming around your ankles, today's films are much more sophisticated and used the RealD technology so the glasses have polarising lenses.

If you believe the hype, and many people do, you would think that 3-D is something brand-new, a leap into the future and something exciting and amazing. It isn't the leap forward that Technicolor was, nor the invention of surround sound. 3-D is a gimmick, something that is managed to con billions of people out of billions of pounds (or, if you prefer, dollars) and has failed to improve any film that I've seen that that format. Another drawback of 3-D is that it desaturates the film and reduces colour by up to 30% so that something like Up is a much brighter film and is a better watch in 2-D.

The next great final frontier in 3-D is the home cinema and 3-D televisions will be available before this year is out, although the number of people who have just bought a brand-new high-definition television and want to immediately replace it with something that offers 3-D is probably negligible. This hasn't stopped the studios who have already earmarked which films they are going to release on Blu-ray in 3-D, the first of which will be Sony's Cloudy with a Chance of Meatballs. I watched that film quite recently on Blu-ray Disc and, even knowing that it was a 3-D release when it cinemas, thought it was perfectly good in 2-D. I have seen some 3-D films at home such as Coraline, Scar and the aforementioned Friday the 13th Part 3 and they have only succeeded in giving me eyestrain and headache. I've only seen a dozen films in at the cinema and none of them, not even Avatar, have persuaded me that 3-D is the way forward. Roger Ebert had this to say about 3-D:

Ask yourself this question: Have you ever watched a 2-D movie and wished it were in 3-D? Remember that boulder rolling behind Indiana Jones in "Raiders of the Lost Ark?" Better in 3-D? No, it would have been worse. Would have been a tragedy. The 3-D process is like a zombie, a vampire, or a 17-year cicada: seemingly dead, but crawling out alive after a lapse of years. We need a wooden stake.

I've nothing against technological advances that increase your enjoyment of films and lead to improvements in narrative cinema. 3-D is not one of these; it has been tried in the past and failed each time. Please let it stay in the past where it belongs. From now on, when given the choice of seeing a film in 2-D or 3-D, I'm not going to pay the surcharge and risk a migraine and will happily watch the film, as I always have done, in 2-D. If a suitable time doesn't exist for me to see a film in 2-D, I will reluctantly put my hand in my pocket but watch the film with a pair of modified glasses that negate the 3-D effect.