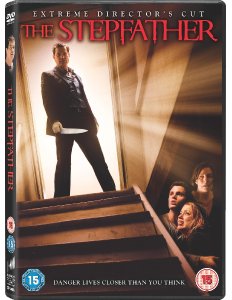 Daddy's Home, On DVD From 19th April, 2010 Sony Pictures Home Entertainment reveals the year's hottest thriller when the extreme director's cut of The Stepfather arrives on DVD on 19th April, 2010. Dylan Walsh (TV's "Nip/Tuck"), two-time Emmy Award® winner Sela Ward (TV's "Once and Again," "Sisters"), Penn Badgley (TV's "Gossip Girl", John Tucker Must Die), and Amber Heard (Pineapple Express, Zombieland) star in the story of a young man who begins to wonder whether his new stepfather might be the notorious murderer he saw on "America's Most Wanted." The killer bonus materials include commentary with Director Nelson McCormick (Prom Night) and actors Badgley and Walsh, a gag reel and two featurettes: the behind-the-scenes documentary "Open House: Making the Film" and "Visualizing the Stunts," where the cast and crew discuss creating and enacting the stunts in the film. The Stepfather will be available on DVD for RRP tbc.

SYNOPSIS:
When Michael Harding (Penn Badgley, TV's "Gossip Girl") returns home from military school, he finds his mum is madly in love with her charming live-in boyfriend David (Dylan Walsh, TV's "Nip/Tuck"). At first, David appears to be the ultimate nice guy and an ideal future husband and stepfather. But when Michael and his girlfriend (Amber Heard, Zombieland) start delving into David's past, they begin to discover a dark and dangerous side to Michael's new "daddy" in this riveting, chilling thriller.


DVD Special Features Include:
The Stepfather has a running time of approximately 98 minutes and is rated 15. Artwork and digital clips are available for download at www.sphepublicity.com. Visit Sony Home Entertainment on the Web at www.SonyPictures.com.