Article
Gumball 3000 out on DVD and iTunes this April

Article
The Littlest Hobo finally arrives on DVD in April

Eleventh Season of Murder She Wrote hits DVD in April 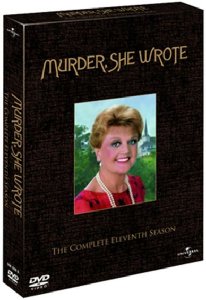 The case has opened on another set of gripping murder mysteries as Angela Lansbury returns as the iconic Jessica Fletcher in Murder, She Wrote: Season 11. Out on DVD from 26th April 2010 from Universal Playback, Season 11 contains 21 sensational episodes of the Primetime Emmy® Award and Golden Globe® nominated series

Read between the lines of Jessica's famous novels and you'll discover what her legions of fans already know - mystery has a way of following this witty writer wherever she goes. Joining Jessica's adventures are guest stars Jeffrey Nordling (24), Doris Roberts (Everybody Loves Raymond), Ann Cusack (The Informant!), Jeri Ryan (Boston Public, Star Trek: Voyager), and more as they become part of Jessica's acclaimed investigations that span the globe from hometown Cabot Cove to tropical Martinique.

No crime lover's collection is complete without these entertaining adventures from the literary sleuth whose life is a real page-turner.

Murder, She Wrote: Did you know?

Ø Angela Lansbury holds the record for the most Emmy nominations for outstanding leading actress in a drama series with 12, one for each of the Murder She Wrote seasons. However she never won the award, which is a record within itself.

Ø The filming location of Jessica Fletcher's hometown of Cabot Cove is actually Jaws Lake as seen on the Universal Studios tram tour.

Jessica Fletcher is a retired English teacher who, after being widowed in her early fifties, became a very successful mystery writer. Her late husband's nephew Grady, who was raised by the Fletcher's following the death of his parents, found one of Jessica's novels and submitted it to a publisher behind her back. Not only did the novel get published, but it became a best seller.

Soon Jessica became an international celebrity and travelled throughout the United States and the world promoting her novels. Her one eccentricity is an insatiable curiosity, especially whenever murder rears its ugly head - which it seems to wherever she goes.

She displays a knack for solving murders and becomes a well respected amateur criminologist. However, most detectives and police officers don't want her anywhere near their crime scenes, until her accurate deductions convince them to listen to her. Some are fans of her books and are glad she's involved in the investigation. With time, she makes friends in many police departments across the USA, as well as a British police officer attached to Scotland Yard.

Her expertise, quick thinking and a keen eye for detail ensures she always catches her criminal.