Blu-ray
My Entire High School Sinking Into The Sea

DVD
We Are What We Are 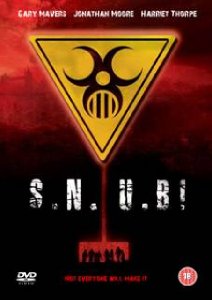 Following a nuclear attack by terrorists on London a mixed bag of survivors are trapped in a Government bunker cut off from the outside world.

With some devastating twists and turns S.N.U.B! is based on the horrifyingly real possibility of a dirty bomb destroying London and this concept is taken beyond realism into the world of the action adventure movies of the 1950's.

Synopsis
A junior minister of the British Government discovers a terrorist plot to detonate a nuclear device in London. Putting self-preservation first he flees with a young American political advisor to a re-commissioned Secret Nuclear Underground Bunker - S.N.U.B. They find themselves entombed in the bunker with a disperate group of individuals caught in the wrong place at the wrong time.

The terrorist bomb is found but attempts by bomb disposal experts fail to prevent it exploding destroying central London and the fallout contaminating the surrounding countryside.

As a result of the blast a group of dangerous convicts breakout from a local high security prison, but are contaminated with radiation and start to mutate. The mutants infiltrate the bunker and one by one the occupants endure a horrible, grisly death. Eventually one of the survivors escapes from the bunker to make contact with the outside world and a rescue helicopter is organised. But inside the S.N.U.B. the mutants are closing in. Not everyone will make it…