DVD
Guilt is My Shadow

Article
British comedy Laxdale Hall out in April on DVD 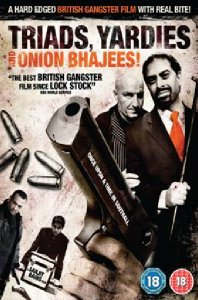 'AN AMAZING COCKTAIL OF CLASSIC BRITISH CRIME FILMS ALL ROLLED INTO ONE.
A MUST SEE FILM!' - MOVIE INTERNATIONAL

A FILM BY:
SARJIT BAINS


This ain't 'Bend it Like Beckham'... this ain't 'East is East'...this is Southall.
WHO RULES LONDON TOWN? BLACK, WHITE OR BROWN?

Welcome to London, home of many creeds and cultures. The modern criminal underworld reflects the diverse races that call London home.

West London is ruled by the 'Holy Smokes' crime syndicate. At their head is the ruthless Chacha (Jas Bassi). His mob includes various psychopathic killers, pimps, and drug dealers.

North London is the territory of the Triads. These ruthless Chinese gangsters will do anything to protect their honour. Leading them is the young Billy Chan.

South London is governed by the Yardies, the Jamaican mafia. At the head of this notorious crew is Lloyd. This gang lives purely for the day and their motto is "Live Fast and Die Young!" East London is home to The Firm. The last stronghold of the original Anglo-Saxon cockney gangsters, The Firm is ruled by Mad Dave (Dave Courtney). They cannot understand how London has come to be ruled by the ethnic mobsters.

Someone is muscling on the Holy Smokes cocaine deals and they are not amused. Added to this deadly event is the theft of six million dollars from Heathrow Airport making an explosive cocktail! Hot on the trail of the missing money is the Metropolitan Police's most corrupt officer Detective Inspector Greaves (Jonathan Reason) and Singh (Manish Patel), London's most ruthless and feared hitman. It's a roller-coaster ride as the Holy Smokes wage war against the Triads, the Yardies and The Firm.