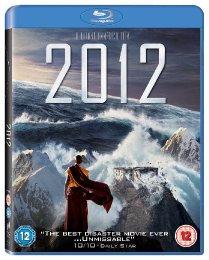 Disaster movie 2012 arrives on DVD and Blu-ray in March 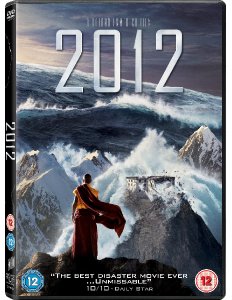 "The best disaster movie ever - superbly suspenseful and thrilling from start to finish. Unmissable." 10/10
Daily Star

From the Visionary Director of The Day After Tomorrow and Independence Day Comes the Ultimate Action-Adventure!

The end of the world is the beginning of a spectacular adventure, when global box office sensation ($711 million worldwide) 2012 arrives on Blu-ray and DVD on 29th March, 2010, from Sony Pictures Home Entertainment. Visionary Director Roland Emmerich, creator of The Day After Tomorrow and Independence Day, outdoes himself with this jaw-dropping epic that's packed with breathtaking action sequences and groundbreaking special effects that must be seen to be believed!

Discover the truth behind the smash hit film with an array of Blu-ray  and DVD bonus extras, including a feature length commentary with Writer/Director Roland Emmerich and Co-Writer Harald Kloser, an alternate ending, deleted scenes and the featurette "Roland Emmerich: Master of the Modern Epic," an intimate look at one of Hollywood's most revolutionary filmmakers.

Exclusive to the Blu-ray version of 2012 are additional groundbreaking bonus features "Roland's Vision: Picture-in-Picture", BD-Live™ enabled movieIQ, which allows viewers to immediately access updated trivia on the film's cast, crew, production and soundtrack - all while watching the movie! Also exclusive to the Blu-ray is the "Interactive Mayan Calendar" feature which allows you to enter the world of the Ancient Daykeepers in this interactive version of the Mayan Calendar.  Simply enter a date, and your horoscope and personality profile will be revealed! Additional blu-ray bonus features on the Blu-ray include the production featurettes "Designing the End of the World," "Science Behind the Destruction,"and "The End of the World: The Actor's Perspective."

Synopsis
Never before has a date in history been so significant to so many cultures, so many religions, scientists, and governments. 2012 is an epic adventure about a global cataclysm that brings an end to the world and tells of the heroic struggle of the survivors. 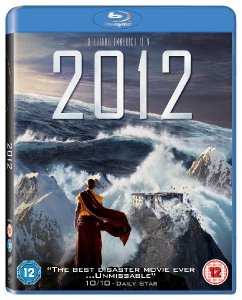 Artwork and digital clips are available for download at www.sphepublicity.com Visit Sony Pictures Home Entertainment on the Web at www.SonyPictures.com The Blu-ray Disc version of 2012 is BD-Live enabled, allowing users to get connected and go beyond the disc via an Internet-connected Blu-ray player. Download content, give feedback through an exclusive survey, and register for rewards.