It's Complicated arrives on DVD and Blu-ray this April 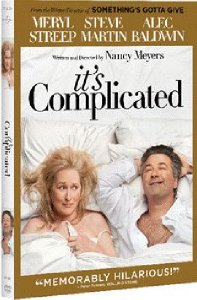 It's Complicated also features John Krasinski ("The Office"), Lake Bell ("Boston Legal"), Mary Kay Place (Youth in Revolt), Rita Wilson (Big Dogs), Alexandra Wentworth ("Head Case"), Hunter Parrish (17 Again) and Zoe Kazan (The Private Lives of Pippa Lee) in this light-hearted story of a woman whose life has it alland then somewhen she finds herself in an unexpected, if not exactly unenjoyable, love triangle with her still sexy ex-husband and an attractive new suitor. Bonus features include a behind-the-scenes featurette and filmmaker commentary.

For further information, go to www.itscomplicatedmovie.com

Synopsis Two-time Academy Award® winner Meryl Streep, Steve Martin and Alec Baldwin star in this hilarious look at marriage, divorce and everything in between.  Jane (Streep) has three grown kids, a thriving Santa Barbara bakery and is on surprisingly amicable terms with her ex-husband Jake (Baldwin).  Finally, a decade after her divorce, life's options seem endlessuntil a few bottles of wine with Jake turns their cordial relationship into an impulsive affair. Caught in the middle of their rekindled romance is Jake's young wife and Adam (Martin), a recently divorced architect who's fallen hard for Jane.  Could love be sweeter the second time around?  It's… complicated!  From writer/director Nancy Meyers comes the comedy that critics call "laugh-out-loud funny" (Rex Reed, THE NEW YORK OBSERVER).