DVD
Love Goddess of the Cannibals

Article
The Horseman out on DVD and Blu-ray in March 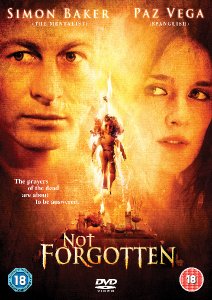 THE PRAYERS OF THE DEAD ARE ABOUT TO BE ANSWERED

Star of the hit TV series 'The Mentalist', Simon Baker (The Devil Wears Prada; Land Of The Dead) heads an impressive cast that includes Paz Vega (The Spirit; The Human Contract; Spanglish),Chloe Moretz (Kick Ass; (500) Days Of Summer; Dirty Sexy Money) and Claire Forlani (CSI: NY) in Not Forgotten, a stylish and atmospheric mystery-thriller packed with suspense and hints of the supernatural.

Successful businessman Jack Bishop (Baker) lives a seemingly perfect life in a peaceful town of Del Rio, Texas with his 11-year-old daughter, Toby (Moretz), and beautiful new wife, Amaya (Vega). But Jack's past holds a dark secret that he hides not only from his family and friends but also from himself. When Toby goes missing, feared kidnapped, during one of her regular junior football team practices, Jack suspects that the transgressions of his former life have returned to haunt him. Desperate in his search to find his daughter, he is compelled to turn to his long forgotten faith in the powers of La Santa Meurte and her followers, the protectors of the sinner and worshippers of the dead. Meanwhile, the more conventional investigation into Toby's disappearance is being led by an insecure, newly appointed local sheriff and a pair of FBI agents who initially believe a repeated sex offender may be responsible.

Jack's own search takes him across the border and into the squalid barrios and seedy brothels of a Mexican border town, where a psychic reveals the secrets of his forgotten past in terrifying detail. As various dark truths are unearthed, an unexpected web of lies, deceit, murder and revenge conspires to destroy Jack by threatening the lives of those he loves the most.

An engrossing and finely performed thriller, Not Forgotten will keep viewers on edge right up to its shocking and totally unexpected denouement.