Blu-ray
The Legend Of The Stardust Brothers

Article
Alice's Adventures in Wonderland re-released on DVD this March

Article
Are you Robsessed? Documentary on Pattinson arrives in March on DVD 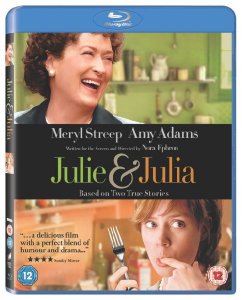 Blu-ray™ and DVD Extras Include the Behind-the-Scenes Featurette "Secret Ingredients: Creating Julie & Julia" and Commentary by Nora Ephron
Exclusive Blu-ray ™ Bonus Materials Feature a Tour of
Julia Child's Kitchen in the Smithsonian Institution, a Look into Julia's Off-Screen Life and Cooking Lessons from World Famous Master Chefs Including Julia Child
In Addition, the Blu-ray ™ Disc Features movieIQ,
Which Allows Viewers to Access Some of Julia Child's Recipes That Were Either Prepared or Mentioned in the Film

Meryl Streep, Golden Globe® winner 2010: Best Actress in a Comedy-Musical (Julie & Julia), Amy Adams, Stanley Tucci, and Chris Messina star in the delightfully delicious hit comedy Julie & Julia coming to Blu-ray™ and DVD on 8th March 2010 from Sony Pictures Home Entertainment. Two women from different decades come together through their own true stories of culinary exploration when dissatisfied writer Julie Powell (Adams) decides to cook and blog her way through Julia Child's (Streep) book Mastering the Art of French Cooking, which launched Child's career. Nora Ephron seamlessly melds the two remarkable, true stories into a comedy that proves that if you have the right combination of passion, obsession and butter, you can change your life and achieve your dreams.

Blu-ray and DVD special features include commentary by writer/director Nora Ephron and the behind-the-scenes featurette "Secret Ingredients: Creating Julie & Julia," which features interviews with the cast and crew. The DVD also includes a cut-down version of the original cookbook, with all the recipes featured in the film and more.

The Blu-ray Disc is packed with exclusive features that will make mouths water.  Included is "Julia's Kitchen," a tour of Julia Child's one-of-a-kind kitchen now housed at the Smithsonian's National Museum of American History, which was custom built by her husband Paul Child to accommodate her 6' 2" frame and to serve as a television soundstage for her cooking shows. Also included is "Family & Friends Remember Julia Child," which picks up where the film leaves off and chronicles her public life including other published works, her numerous television shows, her founding of the American Institute of Food and Wine, the many accolades she received, her philanthropy and her rarely discussed private life: the love story with her husband, her sense of humour, her amazing work ethic, and her love of teaching. Lastly, there's "Cooking Lessons" with master chefs Julia Child, Jacques Pépin, Mark Peel, Suzanne Goin, Steven Lewandowski and Drew Nieporent demonstrating how to make such mouthwatering dishes as Braised Beef Short Ribs and Butter Poached Maine Lobster.

A culinary legend provides a frustrated office worker with a new recipe for life in Julie & Julia, the true stories of how Julia Child's (Meryl Streep) life and cookbook inspired fledgling writer Julie Powell (Amy Adams) to whip up 524 recipes in 365 days and introduce a new generation to the magic of French cooking. Stanley Tucci (The Devil Wears Prada) co-stars in director Nora Ephron's delicious comedy about joy, obsession and butter. Bon appétit!

Blu-ray™ and DVD Special Features Include:

-"Family & Friends Remember Julia Child" - Julia's closest family and friends tell us about the woman they knew and loved.
- "Julia's Kitchen" - Learn all about how the Smithsonian's National Museum of American History acquired Julia's kitchen and take a tour inside.
- "Cooking Lessons":
- movieIQ - "Julia's Recipe Collector" - collect and email your favorite Julia Child recipes while watching the film!