Article
The Royle Family xmas special out in February on DVD

Article
The List out on DVD this coming February 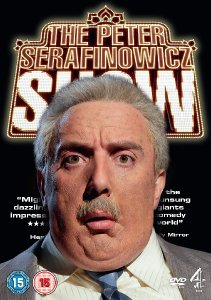 Forbidden Planet is pleased to announce a signing by PETER SERAFINOWICZ. He will be signing the DVD release of The Peter Serafinowicz Show at the Forbidden Planet Megastore, 179 Shaftesbury Avenue, London WC2H 8JR on Monday 1st February 6 - 7pm

Peter Serafinowicz is a cult figure, known by fans for his show-stealing appearances in Spaced, Black Books, How Do You Want Me?, Look Around You and Shaun of the Dead. He also has a hugely credible list of guest appearances to his name - including, famously, providing the voice for Darth Maul in The Phantom Menace.

Taking a humorous swipe at today's choice of viewing, the BAFTA-Award nominated The Peter Serafinowicz Show hosts gloriously futile television game shows, including Heads Or Tails? and Which Hand Is It In?, while offering exclusive 'celebrity' interviews on O! News.

Through his impressions of familiar faces, Peter creates a world in which Simon Cowell and Terry Wogan mingle with famous fictional characters like Darth Vader and with his own quirky creations - like the wonderfully incompetent PI Brian Butterfield. And look out for Robert De Niro, Marlon Brando, Mikey, Mikey and Mikey, and Kitchen Gun's Derek Bum.

Forbidden Planet is the largest store of its kind in the world. Some of the biggest names in Sci-Fi, Fantasy, Comics and Cult Entertainment have come to our London Megastore for signing events, including: Neil Gaiman, Terry Pratchett, Terry Gilliam, Simon Pegg, William Gibson, Mark Millar, Guillermo Del Toro, Brian Froud and Stephen King.

For more news about our signings please go to: http://forbiddenplanet.com/events/