Article
Continous shot horror Cut out in February on DVD 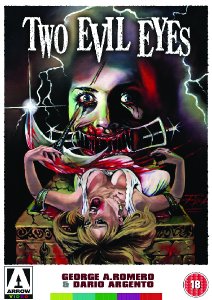 TWO OF HORROR'S GREATEST DIRECTORS, DARIO ARGENTO AND GEORGE A. ROMERO, JOIN FORCES FOR 'TWO EVIL EYES'. Two Evil Eyes (aka Due Occhi Diobolici) brings together two of the horror genre's greatest directors, George A. Romero (Night Of The Living Dead, Dawn Of The Dead, Day Of The Dead) and Dario Argento (Suspiria, Inferno, Tenebre, Sleepless), to remake two Edgar Allan Poe tales previously brought to the big screen by B-movie maestro Roger Corman in his 1962 film, 'Tales Of Terror'.

Directed by Romero, The Facts In The Case Of M. Valdemar tells the story of a scheming, cheating wife (Adrienne Barbeau) who convinces her psychiatrist lover (Ramy Zada) to hypnotise her dying husband (Bingo O'Malley) in order to get him to sign his fortune over to her. When the husband dies while still under hypnosis, he finds himself caught in a limbo between the worlds of the living and the dead, and hungry for revenge.

Featuring plenty of bloody mayhem to please the gore-hounds, courtesy of special make-up effects wizards Tom Savini (Dawn Of The Dead, Creepshow, Day Of The Dead) and John Vulich (Day Of The Dead, TV's Buffy The Vampire Slayer), and set to a suitably chilling score by Pino Donaggio (Carrie, Dressed To Kill, The Howling), Two Evil Eyes is an essential addition to every horror aficionado's collection.