Blu-ray
The Back-up Plan (US)

Blu-ray
Cloudy with a Chance of Meatballs
Related Articles

Article
The Bet out on DVD this coming February 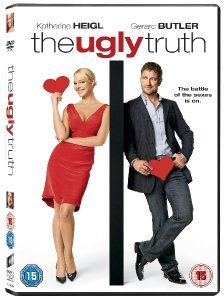 Katherine Heigl and Gerard Butler Expose the Truth About Men, Women and Romance In the Sexy New Comedy From the Director of Legally Blonde!

The Battle of the Sexes Heats up 8th February 2010 on Blu-ray™& DVD Loaded with Revealing Bonus Material
Exclusive to the Blu-ray is the BD-Live™ Enabled movieIQ Feature!


Sony Pictures Home Entertainment invites you to discover the hilarious truth about how men and women differ in their approach to romance when the sexy comedy hit THE UGLY TRUTH debuts on Blu-ray and DVD this 8th February 2010!  Two of Hollywood's hottest stars, Katherine Heigl (27 Dresses, Knocked Up) and Gerard Butler (P.S. I Love You, 300), team up to bring you this no-holds-barred comic updating of the age old battle of the sexes. Heigl is Abby Richter, a romantically-challenged morning show producer who squares off against a chauvinistic news correspondent, Mike Chadway (Butler), with outrageously funny results! Directed by Robert Luketic, who previously helmed the comedy hits Legally Blonde and Monster-In-Law, THE UGLY TRUTH is a classic screwball comedy with a deliciously modern sensibility that's had male and female moviegoers talking - and laughing - everywhere!. Now, comedy lovers can experience the whole truth about THE UGLY TRUTH when it debuts on Blu-ray and DVD this 8th February 2010, loaded with hours of revealing bonus features!

THE UGLY TRUTH shines on Blu-ray and DVD, with sparkling picture and sound, and features irresistible bonus features that dare to expose the truth behind the making of this crowd-pleasing comedy. Also included are the featurettes "The Truth Is Ugly: Capturing the Male & Female Point of View," in which the filmmakers discuss the their efforts to make a romantic comedy with a uniquely balanced male and female perspective, and "The Art of Laughter: A Making of Hilarious Proportions," in which cast and crew reveal how they cope with the unavoidable reality of laughter on the set of a comedy. Additional features on the Blu-ray and DVD include Select Scene Commentary from Director Robert Luketic and Producer Gary Lucchesi; Deleted Scenes; Alternate Endings and a Gag Reel. Exclusive to the Blu-ray edition of  THE UGLY TRUTH is the BD-Live enabled movieIQ feature, which lets viewers access trivia information about the movie's cast, crew, music and production - all while watching the movie!

If you like your comedies brutally honest and outrageously sexy, there's a pretty good chance you're gonna love THE UGLY TRUTH when it arrives on Blu-ray and DVD, available at an SRP of £21.99 (Blu-ray) and £19.99 (DVD).

Synopsis
Katherine Heigl and Gerard Butler star in this wildly funny battle of the sexes. Abby (Heigl), a successful morning show producer, is looking for a lot in a man. Mike (Butler), her obnoxious TV star, knows men only want one thing. Determined to prove that she's not romantically challenged, Abby takes Mike's advice during a promising new romance, but the unexpected results will stun everyone.

THE UGLY TRUTH was written by debuting screenwriter Nicole Eastman and the writing team of Karen McCullah Lutz & Kirsten Smith (The House Bunny, Legally Blonde). The film co-stars John Michael Higgins (Fred Clause, Evan Almighty), Cheryl Hines (TV's "Curb Your Enthusiasm," Waitress), Bree Turner (Just My Luck, The Wedding Planner) and Eric Winter (TV's "Brothers and Sisters," Harold and Kumar 2). It was produced by Lakeshore Entertainment (Million Dollar Baby, Runaway Bride) in association with Relativity Media and distributed by Columbia Pictures. It has a run time of approximately 96 minutes. It has been rated 15 for sexual content and language.

Blu-ray Only Bonus Material
The Blu-ray Disc version of THE UGLY TRUTH is BD-Live enabled, allowing users to get connected and go beyond the disc via an Internet-connected Blu-ray player. Download content, give feedback through an exclusive survey, and register for rewards.