Blu-ray
Drag Me To Hell 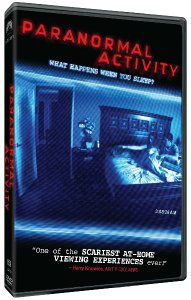 Paramount Home Entertainment presents Paranormal Activity on DVD, a 2-disc Blu-ray edition, and an online-only Limited Collector's Edition on December 29th, 2009, including an unrated version with an alternate ending never shown in theaters! Paranormal Activity is hailed as "a horror phenomenon" and "one of the scariest movies of all time" ultimately earning over $100 million at the domestic box office. The Limited Collector's Edition DVD will include a film cell and limited edition t-shirt.

The "truly scary" (Roger Ebert, Chicago Sun-Times), edge-of-your-seat horror film PARANORMAL ACTIVITY will make its presence known on DVD and two-disc Blu-ray December 29, 2009 from Paramount Home Entertainment.  Hailed as "a horror phenomenon" (Richard Corliss, Time) and "one of the scariest movies of all time" (BloodyDisgusting.com) the hypnotic and harrowing film drove filmgoers to demand that it play in their cities, ultimately earning over $100 million at the domestic box office.  Loaded with suspense and punctuated by moments of sudden and unexpected horror right up to the shocking ending, PARANORMAL ACTIVITY is more frightening to watch at home, even with the lights on.

Written and directed by Oren Peli, the intense and chilling story follows a young, middle-class couple who become increasingly disturbed by a presence that may or may not be demonic, but is certainly most active in the middle of the night.  Especially while they sleep.  The DVD and two-disc Blu-ray include the original theatrical version of the film, plus an unrated version with a shocking alternate ending not seen in theaters.  The Blu-ray also includes a digital copy of the theatrical version.

The Limited Collector's Edition DVD can only be ordered online and includes: