Fight Club: 10th Anniversary Edition out on Blu-ray this month 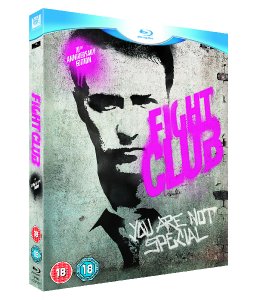 You were looking for something to change your life. You got it.

Based on the novel by Chuck Palahniuk (Choke), Fight Club is a pitch-black comedy that follows a ticking-time-bomb insomniac (Edward Norton; The Incredible Hulk) seeking an escape from his mundane existence and white-collar job in American society.  Finding solace only in feigning terminal illness and attending support groups, he meets the feisty chain-smoking vixen Marla Singer (Helena Bonham Carter; Terminator: Salvation; Harry Potter films) who immediately gets under his skin with her unconventional outlook on life.

Upon returning from a business trip, he stumbles upon a more intriguing character, the subversive soap salesman, Tyler Durden (Brad Pitt; Mr. and Mrs. Smith).  The two quickly become friends, bonding over a mutual disgust for corporate hypocrisy and find release in an eccentric, shocking new form of therapy - Fight Club.  A brutal, bare-knuckle underground secret society run by the premise that men are only able to find freedom when they are willing to risk death, the club escalates to a whole other level, where the boxing matches and harmless pranks soon lead to an out-of-control spiral full of twists and turns towards oblivion and ironically, self-discovery.

The Fight Club: 10th Anniversary Edition Blu-ray is packed full of punches with all-new bonus materials including two interactive featurettes - "A Hit In The Ear: Ren Klyce and the Sound Design of
Fight Club" which allows users to remix four key scenes themselves with the help of
Oscar-nominated sound designer Ren Klyce; and "Insomniac Mode: I Am Jack's Search Index," giving viewers the ability to access any part of the disc's extensive bonus material via interactive tools.

Fight Club has received numerous accolades over the years - listed as one of the "50 Best Guy Movies of All Time" by Men's Journal in 2003; the quote "The first rule of Fight Club is you don't talk about Fight Club" was voted #27 of "The 100 Greatest Movie Lines" by Premiere in 2007; Empire readers voted the film as the ninth and eighth greatest releases of all time in 2004 and 2006, respectively; and it received the "Guy Movie Hall of Fame" honour at the 2009 Spike TV Awards.  The DVD itself is one of the top-performing titles of all time.

A lonely, isolated thirty-something young professional in an unidentified, semi-stylized city, seeks an escape from his ordinary life with the help of a devious soap salesman.  They find their release from the prison of reality through underground fight clubs, where men can be what the world denies them.