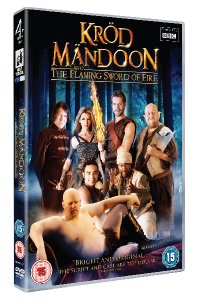 "Groundbreaking action comedy"
Daily Express
"Red Dwarf meets Monty Python and the Holy Grail, but a whole lot slicker"
Independent
"The best of the week... The new medieval comedy romp Krod Mandoon and the Flaming Sword of Fire is an absolute hoot."
The Times
"Belly laughs aplenty."
Glamour
"A new sitcom that does for sword-and-sorcery adventures what Red Dwarf did for sci-fi".
Radio Times

In the darkest days of the Meconian Empire, tyranny reigned throughout the land until a glimmer of hope arrived - the son of a blacksmith and a stay-at-home mum, a man of unwavering determination: Krod Mandoon (Sean Maguire, Meet The Spartans), the last great hope in the struggle against the evil ruler, Chancellor Dongalor (Matt Lucas, Little Britain).

Together, they must overcome a myriad of obstacles in their quest to save the world, including name-calling, hired assassins and bad hair days. Will they succeed?

Krod Mandoon And The Flaming Sword Of Fire also features John Rhys-Davies (The Lord Of The Rings, Raiders Of The Lost Ark, Indiana Jones And The Last Crusade), James Murray (Primeval, Under The Greenwood Tree, Cutting It), and Alex MacQueen (The Inbetweeners, Holby City, The Thick Of It).

The series is co-produced by Hat Trick Productions and MRC for Comedy Central and BBC Television. It is created by Peter Knight, written by Peter Knight and Brad Johnson, directed by Alex Hardcastle (Lead Balloon, Not Going Out) and produced by Mario Stylianides (Fonejacker, Armstrong & Miller).

Extra's featuring on the DVD include: