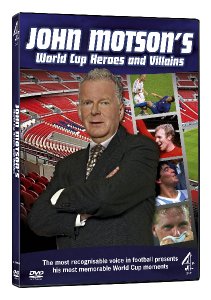 British broadcasting legend and all-round football expert John Motson takes us through his definitive list of World Cup Heroes And Villains. With England qualifying for the 2010 World Cup, John Motson's World Cup Heroes and Villains is a must for all football fans and is available to own on Monday 23rd November courtesy of 4DVD.

World Cup fever is here, and with every fan counting down the days to the biggest sporting event in 2010, World Cup Heroes and Villains is the perfect way to get even more excited! The voice of football and legendary commentator, John Motson, guides us through a celebration of the greatest goals and golden moments, as well as all the traumas and tribulations that can torment a nation.

John Motson is an institution whose commentaries are part of the fabric of football. Having one of the most recognisable voices, he has described thousands of goals, magic moments and heartbreaking decisions for 40 years. He is a national treasure and his reputation for statistic filled commentaries is a perfect vehicle for this compilation of his World Cup Heroes and Villains.

The DVD is the ultimate collection of the World Cup's most talented performers, featuring:

With football being a game of two halves there are moments when the hopes and dreams of a nation are crushed by a moment of madness, the DVD also features:

In addition to the best and the worst footballers, referees are not let off the hook as there are the worst sendings off, plus all those crazy fans, silly celebrations and the biggest tantrums going.

John Motson's World Cup Heroes and Villains has nine exciting sections that will make us cry with tears of joy and despair: