Blu-ray
Drag Me To Hell

Horror flick Grace arrives in US homes this September

"A satirical creepfest that mines modern motherhood for all its latent terrors..."
-- Variety

ON DVD AND BLU- RAY™ 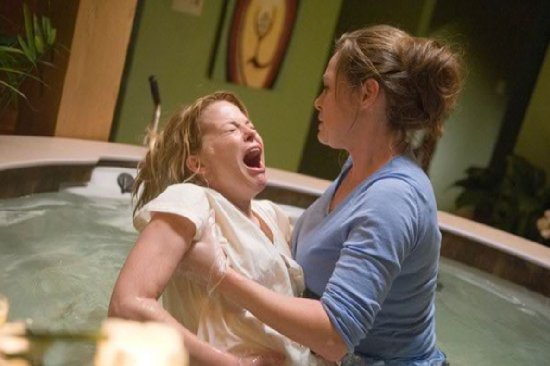 BEVERLY HILLS, CA - An absolute sensation at the 2009 Sundance Film Festival - where two people fainted during the film's premiere - and a runaway hit on the international film festival circuit, Paul Solet's Grace will bow September 15, 2009 on DVD and Blu-ray™. Grace is an unforgettable emotional and psychological journey into terror, as a young woman (Jordan Ladd, Cabin Fever, Quentin Tarantino's Death Proof) is forced to make the ultimate maternal sacrifice when the stillborn child she carried to term returns to life with a horrifying appetite. Pre-book is August 13, and SRP is $26.97 for the DVD, and $34.97 for the Blu-ray™. Grace is produced by Ingo Volkhammer, Cory Neal, Adam Green and Kevin DeWalt. Neal and Green are the writing/directing/producing team behind the contemporary cult classics Hatchet and Spiral.

After years of trying to conceive, Madeline (Ladd) and Michael Matheson (Stephen Park, Scary Movie 3, The Pink Panther) are finally about to become parents. But with only weeks to go before delivery, an accident leaves both Michael and the unborn child dead.  Devastated, Madeline decides to carry the child to term and deliver naturally.  What seemed like madness becomes a miracle when, after delivering a dead child, Madeline finds her baby is indeed alive…and hungry. She soon discovers that her baby - now named Grace - thirsts for something more than mother's milk, and Madeline is determined to feed her child, no matter the consequences. With nowhere to turn, Madeline must make a mother's ultimate decision: What will she sacrifice to keep her child alive?

Hailed as "downright chilling" by Variety, and "… a blood-soaked piece of social commentary" by MSN, Grace has emerged among critics as nothing short of a genre phenomenon.  Cinematical wrote: "First-time writer-director Paul Solet…proves himself adept both as a visual storyteller, and as a guy who can make you crap your pants," while EOnline bluntly stated: "Let this be a warning: View at your own risk."

Grace on DVD and Blu-ray cradles a bundle of bonus features charting the film's conception, execution and delivery:

Grace was written and directed by Paul Solet, and produced by Ingo Vollkammer, Cory Neal, Adam Green and Kevin DeWalt. Scott Einbinder and Simon Edery are Executive Producers. Zoran Popovic was Director of Photography and Martina Buckley was Production Designer. The film is an Indigomotion release of an ArieScope Pictures Production in association with Dark Eye Entertainment, and will be distributed by Anchor Bay Entertainment.

Los Angeles and Berlin-based LEOMAX ENTERTAINMENT is a privately held, equity-backed transatlantic motion picture company, founded by senior partners Ingo Vollkammer and Scott Einbinder to develop, finance, produce, and acquire high-concept genre motion pictures for theatrical and direct-to-video distribution. Leomax concentrates on producing branded, and potentially brand-able commercial motion pictures for American and worldwide audiences through its Indigomotion label. Overture Films reserves first-look rights to all Leomax motion pictures produced in conjunction with Starz for theatrical distribution. For its part, Leomax, by means of its multi-million dollar production and P&A facility, also has the ability to market and release its own productions and acquisitions in partnership with other studios and independent distribution companies.