Article
Ichi out in August

Article
The Life Before Her Eyes out in August

Urban thriller Shifty out in August 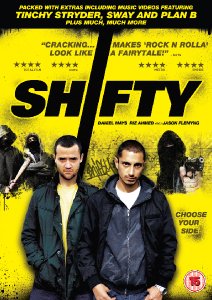 
"Packs a powerful punch… An urban film with guts, heart and soul" - The List
"Will restore your faith in British film" - Dazed & Confused
"Already being hailed as the best British film of the year" - Evening Standard
"The British urban film has finally come of age" - The Guardian
"Our favourite film of the year so far… Shifty is a must see" - RWD
"It is 13 years since Trainspotting was release and that is an awfully long time for another first-class British movie about British drug culture to come along. But here it is" - The Sun


Shifty is a sharply scripted, witty, urban thriller, from writer/director Eran Creevy. Set on the outskirts of London it follows themes of friendship and loyalty over the course of 24 hours in the life of a young drug dealer, the charismatic "Shifty".

- Over 100 minutes of Extended Interviews with Cast & Crew
- Riz Ahmed, Sway, Plan B: SHIFTY (Uncut Version)
- Scene Storyboards - See How The Key Scenes Were Brought To Life By The Filmmakers
- The Complete SHIFTY Script