Article
The Life Before Her Eyes out in August

G.I. Joe: The Movie out in August 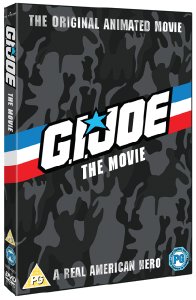 
To coincide with the nationwide theatrical release of the live action movie G.I. JOE: THE RISE OF COBRA, Metrodome brings you the original animated feature, G.I. JOE.

G.I. JOE is the codename for one of the world's most highly trained special mission forces. Its purpose: to defend world freedom against Cobra, a ruthless terrorist organisation determined to rule the world!

A 40,000-year-old race of snake people resurface and with the help of Serpentor, Desto, Baroness, and Dr. Mindbender, plan to eliminate all of mankind and rebuild Cobrala. Once rulers of Earth, the snake people were driven underground by ice-age temperatures. While in exile, they developed a plant whose spores turn ordinary men into mindless, weak animals. The key to their plan is G.I. JOE'S secret project - the Broadcast Energy Emitter. Only this device can generate enough heat so that the spores can mature. Humankind's very existence depends on G.I. JOE, but are they strong enough, smart enough or cunning enough to fight a warrior race with 40,000 years of experience?


Please note there are no special features.