Article
G.I. Joe: The Movie out in August 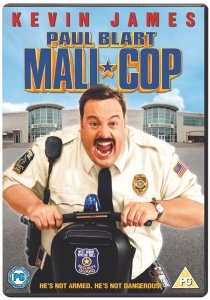 Don't Mess With His Mall!

The Paul Blart: Mall Cop Blu-ray and DVD offer fans several bonus features on Kevin James' career and his thoughts on being a mall cop, the film's extreme sports actors and stunts, and behind-the-scenes featurettes on the making of the film! BD-Live users will also be able to participate in a peer-to-peer chat function called CineChat, which is exclusive to the Blu-ray disc. The Blu-ray disc will also include a Digital Copy of the film.

Synopsis
With a heart that won't quit, a stomach that won't stop gurgling and a self-sworn oath to protect his turf, he's Paul Blart: Mall Cop. Mild-mannered Paul Blart (Kevin James, I Now Pronounce You Chuck and Larry, Hitch,TV's "The King of Queens") has always had huge dreams of becoming a State Trooper. Until then, he patrols the local mall as a security guard. With his closely cropped moustache, personal transporter and gung-ho attitude, only Blart seems to take his job seriously. All of that changes when a team of thugs raid the mall and take hostages. Untrained, unarmed and a super-size target, it's up to Blart to save the day.

Also, Only on Blu-ray™ High Def