DVD
The House by the Cemetery: Masters of Giallo

Article
The Cheerleaders Box Set arrives in May on DVD

True horror fans can prepare to rejoice. The undead spirit of the "video nasty" and some of the best examples of Italian exploitation cinema are about to be raised from the grave and reborn on DVD courtesy of Arrow Video's forthcoming Masters of Giallo imprint. The first bloody batch, hitting the shelves on 29th June 2009, gives a much-welcomed new lease of life to three of the genre's most revered classics - Dario Argento's Sleepless, Lamberto Bava's Macabre and Lucio Fulci's The House by the Cemetery. Released completely uncut on DVD for the first time in the UK, each film comes with an unholy colelction of brand new extras, along with two-sided sleeve inserts featuring all-new, specially commissioned exploitation artwork plus the film's original release artwork. Finally paying these movies their due respects after far too long, these releases are everything an insatiably hungry horror fan could ask for. As a special bonus, each release also comes complete with a poster featuring the brand new art. 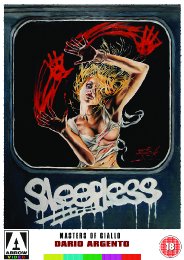 In Dario Argento's Sleepless (Non ho sonno, 2001) insomniac detective Moretti (Max von Sydow) is called upon to investigate a series of murders which bear a remarkable resemblance to those committed 17 years earlier and attributed to a killer nicknamed "The Dwarf." Is the new spate of crimes being committed by the same culprit or a copycat killer? Aided by Giacomo, the son of one of the original murderer's victims, Moretti sets out to solve the mystery.

Opening with a thrilling 20-minute sequence that reminds the viewer just why Argento is regarded as a true master of horror, Sleepless sees the director on fine form and is full of his trademarks, from the murderer's black glove and glinting knives to the beautiful women in peril, an abundance of red linen, unrelenting violence and, of course, glorious cinematic set-pieces, the best of which is an incredible, slow tracking shot of a carpet which leads to a truly gruesome pay-off. 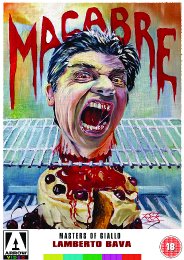 Lamberto Bava's stunning debut feature, Macabre (Macabro, 1980), is a stylish and blackly comic work bizarrely inspired by actual events. A disturbed young woman devastated by the death of her boyfriend moves into a boarding house where the blind landlord, regularly overhearing the sounds of lovemaking behind closed doors, becomes convinced his new tenant has resumed her passionate affair with her late lover! It sounds crazy, but the landlord never sees anyone enter or leave the apartment in question. Of coures, he is blind, but is that the only reason? As his quest to discover the truth behind his suspicions unfolds, his findings propel the distasteful proceedings to a chilling climax involving a fridge that will end viewers' midnight snack cravings forever. 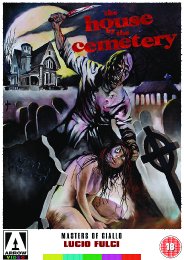 Gore-master Lucio Fulci's zombie favourite The House by the Cemetery (Quella villa accanto al cimitero, 1981) sees Dr. Norman Boyle rather ill-advisedly accepting a research assignment previously abandoned by a suicidal former colleague and moving his family into a creaky old mansion (unsurprisingly situated next to a cemetery!) in New England. It's not long before his young son begins repeating some dire warnings from his new "imaginary" friend relating to the house's bloody past and its equally ominous future. Meanwhile, Boyle's investigation into his colleague's death has unearthed the diabolical history of the house's original tenant, a deranged surgeon with a penchant for illegal experimentation and the benefits of flesh-eating immortality. Hey, what's that noise coming from the cellar? Cue maggot-riddled zombies, flesh-piercing pointy things, decapitation and much more.

I've reviewed these and the reviews can be found by following the links below: