Article
Rare footage from The Beatles out on DVD in September

Che Part One and Part Two out in June 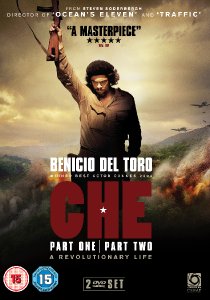 From the director of Traffic, Ocean's Eleven &
Erin Brockovich

Produced and directed by Steven Soderbergh

One of the most eagerly awaited and critically acclaimed films of 2009, Che is an epic saga exploring the fascinating life of Ernesto "Che" Guevara, one of the most influential political figures of the twentieth century. Directed by Academy award winning filmmaker Steven Soderbergh (Erin Brockovich, Out Of Sight, Traffic, Ocean's Eleven), the two films star Benicio Del Toro (The Usual Suspects, Fear And Loathing In Las Vegas, 21 Grams) in a career-defining role that won him the best actor award at the 2008 Cannes Film Festival.

On November 26, 1956, Fidel Castro sails to Cuba with eighty rebels. One of those rebels is Ernesto "Che" Guevara, an Argentine doctor who shares a common goal with Fidel Castro - to overthrow the corrupt dictatorship of Fulgencio Batista. Che proves indispensable as a fighter, and quickly grasps the art of guerrilla warfare. As he throws himself into the struggle, Che is embraced by his comrades and the Cuban people. Partly based on his own memoirs (Reminisces Of The Cuban Revolutionary War), Che Part 1 tracks his rise in the Cuban Revolution, from doctor to commander to revolutionary hero.

Che Guevara was a man of extreme integrity who believed that life should be motivated by moral incentive as appose to material gain. It was a belief that made him instrumental in the 1959 Cuban uprising and the historic siege on Batista's regime. It was also a belief that would lead him into the relentless, savage terrain of the Bolivian jungle and towards his tragic demise. Che Part 2 is a poignant and masterful portrayal of a complex icon that constantly challenged himself and the world around him.