Blu-ray
Jumanji: Welcome To The Jungle

Article
The Admiral out in July

Article
Mumbai Calling out in July

Article
Il Divo out in July

Diminished Capacity out in July 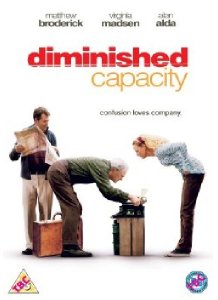 It's often said that sometimes what you lose is not as important as what you find.  DIMINISHED CAPACITY is the perfect summer comedy to prove this theory when it arrives on DVD on July 27 2009

Director Terry Kinney's delightfully poignant and bittersweet comedy poses the question: How much is a good memory worth? That's the question that faces newspaper editor Cooper (Matthew Broderick, Ferris Bueller's Day Off) after a debilitating concussion takes him from the political pages to comic strip detail. Looking for answers, he travels home to Missouri where his now senile Uncle Rollie (Alan Alda, M*A*S*H) is on the verge of losing his home.

When a valuable baseball card is thrown into the mix, these two men along with a motley group of hometown friends, including Cooper's high school sweetheart, Charlotte (Virginia Madsen, Fire with Fire), head to a memorabilia expo to make the deal of a century. Diving headfirst into a snake pit of slick salesmen, crooked dealers and rabid fans reveals that there are some things in life that you can't put a price on.