Article
The Cheerleaders Box Set arrives in May on DVD

Article
Angels and Demons out in September

Article
Terminator 3: Rise of the Machines arrives in May

Article
Cartoon series Wolverine and the X-Men out in May

The Da Vinci Code: Extended Cut out on Blu-ray 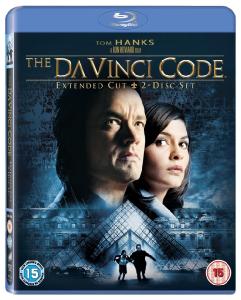 The Da Vinci Code: Extended Cut
Available to buy and rent on Blu-ray disc
4th May 2009

The mystery unfolds in a whole new way 4th May, 2009 when The Da Vinci Code: Extended Cut is released on Blu-ray Disc from Sony Pictures Home Entertainment. The two-disc extended cut will be available for the first time ever, exclusively on Blu-ray High-Def. The Da Vinci Code: Extended Cut includes 28 minutes of never-before-seen footage and all-new special features including the interactive picture-in-picture (I-PiP) feature "Unlocking the Code" which allows viewers to toggle between eight simultaneous I-PiP streams, new commentary on select scenes with director Ron Howard, and advanced BD-Live features including cinechat in-movie chat. The set also includes an exclusive high-def first look at Angels & Demons (in cinemas May 15th ), - a complete five minute scene from the upcoming film introduced by Oscar®-winning director Ron Howard (Best Director, A Beautiful Mind, 2002) and available only on The Da Vinci Code: Extended Cut Blu-ray Disc.

Synopsis:
In The Da Vinci Code, noted symbologist Professor Robert Langdon (Hanks) and police cryptologist Sophie Neveu (Tautou) go on a heart-racing quest to unearth the biggest cover-up in human history. Langdon is called to the Louvre Museum late one night where a curator has been murdered, leaving behind a mysterious trail of symbols and clues. With his own survival at stake, Langdon unveils a series of stunning secrets hidden in the artwork of Leonardo Da Vinci, all leading to a covert society dedicated to guarding an ancient secret that has remained hidden for 2000 years. The pair set off on a frantic quest through Paris, London and Scotland, collecting clues as they desperately attempt to crack the code and reveal secrets that will shake the very foundations of mankind.