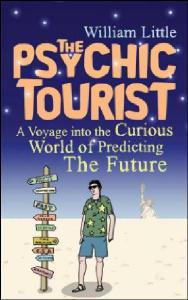 Can people really see into the future? Can someone's life be predicted? Are physicists on the verge of discovering the first time machine? And why does a Nobel prize-winning scientist believe that humans are capable of sensing the future?

Following a prediction of his sister's death, journalist William Little sets out on a quest to find out the truth about prediction and prophecy. THE PSYCHIC TOURIST: A VOYAGE INTO THE CURIOUS WORLD OF PREDICTING THE FUTURE is the story of his journey into the world of the psychic, where he discovers more than he'd ever imagined...

From a witches' coven in a haunted wood, to hunting for murderers with psychic detectives and the CIA, from the doorsteps of the world's most powerful and revered psychics to the 007 of psychic spies, Little aims to find out whether people can really see into the future.

Containing exclusive interviews with some of the world's leading psychics and astrologers, including Sylvia Browne, Sally Morgan, and Diane Lazarus, and a Nobel-prize winning scientist who believes science can prove psychic power, Little attempts to find out once and for all whether someone's life can truly be predicted and whether ordinary people can sense danger before it happens. Little also grills the renowned sceptic Richard Dawkins, who admits that finding a sixth sense 'would be wonderful', and tracks down Derren Brown to ask whether he really is as psychic as he would have people believe.

In a book that answers the unanswerable about what science, psychics, and crystal balls can reveal about tomorrow, William Little lifts the lid on the most sought-after destination of them all - the future. Through a rollercoaster ride of mystics, mishaps and mayhem, Little even discovers uncomfortable facts that make him reassess his own beliefs. In the vein of Jon Ronson and Louis Theroux, THE PSYCHIC TOURIST will appeal both to believers and sceptics in the way it offers an unparalleled insight into an endlessly fascinating subject.

WILLIAM LITTLE is a freelance journalist for the Saturday Telegraph magazine, the Daily Mail, Guardian, The Times, and Financial Times. He has also worked for Arena, Esquire and Cosmopolitan, and contributed articles to the Independent, the Daily Express and the Big Issue, among many others. He is an entertaining interviewee and an available and suitable author for TV and radio interviews. He grew up in the West Midlands.

· Icon Books was founded in 1991 and is a publisher of popular, intelligent trade non-fiction
· Icon is a member of the Independent Alliance
· More information at www.iconbooks.co.uk