Article
Turn It Up out on DVD in March

Quarantine out to buy on Blu-ray and DVD this march 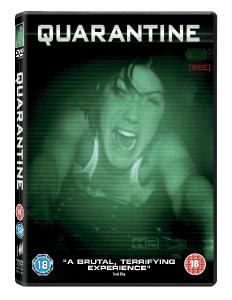 First-rate fright-fest Quarantine is available to buy on DVD and Blu-ray on 9th March 2009, courtesy of Sony Pictures Home Entertainment.

No details, no witnesses and no evidence - until now. Television reporter Angela Vidal and her cameraman are assigned to spend the night shift with an LA Fire Station. After a routine 911 call takes them to a small apartment building, they find police officers already on the scene in response to blood curdling screams coming from one of the apartments. They soon learn that a woman living in the building has been infected by something unknown. After a few of the residents are viciously attacked, they try to escape with the news crew in tow, only to find that the building has been quarantined…

A genuinely chilling and claustrophobic film that racks up the tension with stunning special effects and realistic hand-held camera work, this must-see horror is as scary as hell with a host of jumpy scenes.

Guaranteed to keep you on the edge of your seat, dare you see Quarantine?