Article
Thick as Thieves out in February

The Feathered Serpent - Complete Series due in February 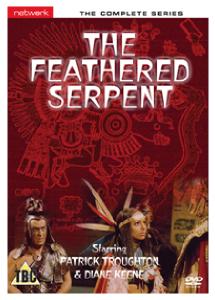 Network is delighted to announce the release of the cult Thames Television children's drama THE FEATHERED SERPENT (CERT TBC) for the first time on DVD, RRP £19.99. All twelve episodes are contained in this set complete and uncut and available to from all good retailers from 23rd February 2009.


Written by John Kane (Dr Who) and directed by Vic Hughes (Chocky) and Stan Woodward (The Tomorrow People), THE FEATHERED SERPENT will appeal to all fans of cult children's shows. A star-studded British cast led by Patrick Troughton (Doctor Who), Diane Keen (The New Avengers) and Brian Deacon (A Zed and 2 Noughts) appear in this lavish tale of murder, intrigue and political manoeuvring set amidst the splendour and turmoil of ancient Mexico. Originally broadcast on ITV between 1976 and 1978, this release comprises every episode of this Thames Television children's drama, which remains memorable for its spectacular sets and lavish costumes.

Within the Toltec civilisation of ancient Mexico, ritual human sacrifice was an accepted part of everyday life. Our story begins as the old religion of the peaceful god Quala - "The Feathered Serpent" - is coming to an end; whereas Quala only demanded offerings of fruit and flowers, Nasca (Patrick Troughton), the fanatical and power-hungry priest, calls for "blood, and yet more blood" to satisfy the new god Teshcata - "The Smoking Mirror". Against this backdrop, Tozo (Richard Willis) a young servant boy, is sent by his master Prince Heumac (Brian Deacon), King of the Toltecs, to the court of the mighty Emperor Kukulkhan - a peaceful ruler who hopes to bring about the return of Quala by means of an arranged marriage between his daughter Chimalma (Diane Keen) and Prince Heumac. Tozo quickly becomes caught up in a power flux between the forces of good and evil, and must call upon all his strength and ingenuity to survive…

THE FEATHERED SERPENT will appeal to all fans of cult kids dramas and those who previously bought Network's THE ACE OF WANDS and THE OWL SERVICE.

DISC ONE - SERIES ONE

Episode One: Nasca, the High Priest, has installed the Emperor Kukulkhan in his newly built palace and temple complex; having sacrificed every slave who built the complex and murdered its architect, he calls for further sacrifices to appease the new god, Teshcata. Amid the bloodshed, young servant boy Tozo arrives at the palace…
Original ITV Transmission 21 June 1976

Episode Two: Otolmi, the blind priest, tells Tozo of his dream and together they discover the secret of the palace wall. Prince Heumac is presented to the court of the Emperor Kukulkhan, and Nasca marks the victims for the sacrificial ceremony to be given in his honour.
Original ITV Transmission 28 June 1976

Episode Three: Tozo enters the secret passage in the palace wall in a bid to find his master and warn him of the danger foretold by Otolmi's dream. Kukulkhan stays the night in the temple to consult his dead ancestors and receives a grim judgement, and Nasca goads Mahoutec into a fight to the death with Prince Heumac.
Original ITV Transmission 5 July 1976

Episode Four: Tozo is captured and tortured by Chadac to make him betray his master. Prince Heumac unravels the mystery of a fragment of a chart he finds in the temple. The fanatical priest, Nasca, offers up the heart of Kukulkhan to his god, Teshcata, in a ritual ceremony in honour of the dead Emperor.
Original ITV Transmission 12 July 1976

Episode Five: Nasca accuses Heumac of sorcery, and tricks Mahoutec into leading his army in a surprise attack on the Toltec camp. Tozo faces great danger in the temple, and the Empress Chimalma is forced to spend a terrifying night in the Chamber of Screams.
Original ITV Transmission 19 July 1976

Episode Six: The events foretold in Otolmi's dream come true. Prince Heumac is denounced and a sacrificial procession leads him to the summit of the old Pyramid of the Sun, where the action reaches a dramatic climax and the knife descends…
Original ITV Transmission 26 July 1976

Episode One: Empress Chimalma is about to marry Prince Heumac of the Toltecs. However, Xipec, Governor of the Gold Region, challenges the match, and Heumac is forced to face the perils of the Stone Cage to prove himself worthy of the title of Emperor. Keelag, a mad recluse, is chosen to embalm the body of the slain priest, Nasca. Is this the end of the evil reign of terror?
Original ITV Transmission 3 April 1978

Episode Two: Trapped in the darkness of the Stone Cage, Heumac and Tozo face three tests of courage, wisdom and ingenuity. Meanwhile, Nasca, brought miraculously back to life by Keelag's magic potion, devises a plot to strike the city with a plague of madness and so bring about the downfall of the Empress Chimalma.
Original ITV Transmission 10 April 1978

Episode Three: The evil hag, Keelag, shows Nasca how he can control the minds of men by using magic powers. The statue of Teshcata is pulled down and in its ruins, Tozo finds the sacred mirror that holds the key to the hiding place of the missing crowns of Chichen-Itza. If they cannot be found, the royal marriage between Prince Heumac and Empress Chimalma will not take place.
Original ITV Transmission 17 April 1978

Episode Four: Nasca uses a magic lamp to mesmerise Chimalma and her councillors, and exert his evil influence over them. Keelag poisons the first of the city wells and as the madness spreads, one of its victims is brought before the court. Tozo is tortured by Xipec and his followers to force him to reveal the whereabouts of the sacred mirror of Teshcata.
Original ITV Transmission 24 April 1978

Episode Five: The forces of evil gather momentum and the lives of Tozo and Prince Heumac are in danger. Nasca tricks Empress Chimalma into believing that she caused the madness that has struck down the city; to atone she must forfeit her life.
Original ITV Transmission 1 May 1978

Episode Six: Tozo discovers the secret of Teshcata's dark mirror and solves the mystery of the missing crowns of Chichen-Itza. His master, Prince Heumac, is challenged to fight Xipec to the death in ritual hand-to-hand combat. In a final desperate bid to seize power, Nasca confronts the followers of Quala in the Temple.
Original ITV Transmission 8 May 1978