Article
Il Divo out in July

Article
Hush out in July

Article
Pedro out in July

Article
Lordi lordi it's Dark Floors on DVD in April

From the director of THE CONSEQUENCES OF LOVE & THE FAMILY FRIEND

A film by PAOLO SORRENTINO 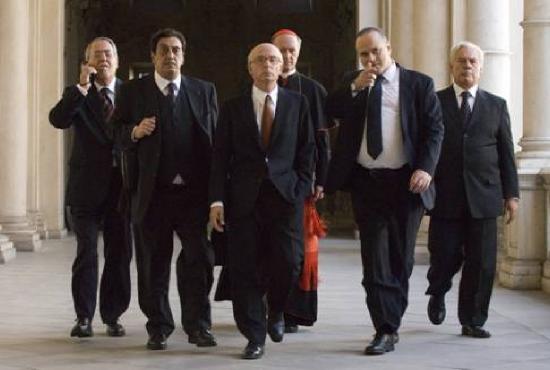 
Synopsis
In Rome, at dawn, when everyone is sleeping, one man is awake. That man is Giulio Andreotti.
He's awake because he has to work, write books, move in fashionable circles and, last but not least, pray. Calm, crafty and inscrutable, Andreotti is synonym of power in Italy for over four decades. At the beginning of the Nineties, this impassive yet insinuating, ambiguous yet reassuring figure appears set to assume his seventh mandate as Prime Minister without arrogance and without humility. Approaching seventy, Andreotti is a gerontocrat who, with all the attributes of God, is afraid of no one and does not know the meaning of awe, since he is accustomed to seeing it stamped on the faces of all his interlocutors. His satisfaction is muted, impalpable. For him, satisfaction is power, with which he has a symbiotic relationship. Power the way he likes it. Unwavering and immutable, from the outset. He emerges unscathed from everything: electoral battles, terrorist massacres, slanderous accusations.He is untouched by it all, unchanging.
Until the strongest counter power in Italy, the Mafia, declares war on him. Then things change. Perhaps even for the enigmatic, immortal Andreotti. But the question is: do they really change or only appear to? We can be sure of one thing: it is difficult to tarnish Andreotti, the man who knows the ways of the world better than any of us.