DVD
Fear(s) of the Dark 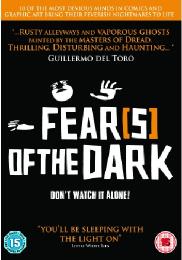 FEARS OF THE DARK

"Excellent.. Wonderful.. Scary as hell" **** - The List
"An exquisite collection of mini-nightmares" - Sunday Times
"You'll be sleeping with the lights on" - Little White Lies

Spiders' legs... hypodermic needles...dead things... things that go bump in the night...
growling things...creatures baring their teeth...There are so many things that have scared us at some point in our lives.

Now, six of the world's most devious minds have breathed life into their own feverish nightmares, taking you on a journey to the pitch black heart of fear itself. This unprecedented animated epic features the coolest, most hip, underground, cutting edge, cult, visual and comic book artists of our time. Brought together for the first time on celluloid they delve beneath the skin to rattle the exact nerve that sends shivers racing down your spine.