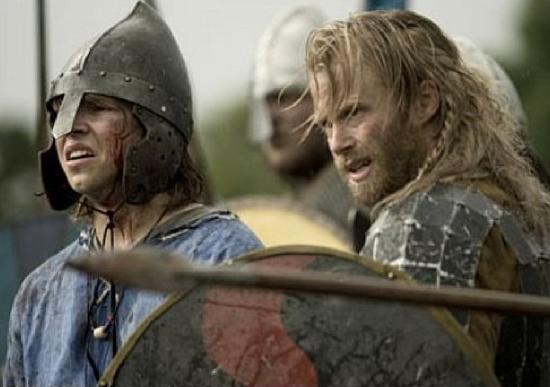 From BAFTA nominated and award-winning director Justin Hardy, City of Vice, The Relief of Belsen, Trafalgar Battle Surgeon, comes a behind the shield-wall look at the most famous year in British history 1066, released exclusively by 4DVD on Monday 23rd February 2009.

Filmed entirely on location in Yorkshire, 1066 stars an international cast, including Mike Bailey (Skins), Francis Magee (Layer Cake), Søren Byder (Foyle's War) and Anthony Debaeck (Wolfman), is written by Peter Harness (City of Vice, Is There Anybody There?) and is narrated by Ian Holm (The Lord of the Rings).
In this innovative blend of historical drama and original source material, 1066 takes the audience on a journey through this iconic year, seen not from the saddles of kings and conquerors, but through the eyes of the ordinary villagers who fought on their behalf.

Combining quotes from original sources with scripted dialogue, 1066 tells the tale of three ordinary Anglo-Saxons who are sucked into fighting a brutal war with first the Vikings and then the Normans. Through three great battles of that year - Fulford, Stamford Bridge and Hastings - 1066 follows the fortunes of three tribes of men as they are hurled into the turmoil of war.

From England there's Ordgar (Francis Magee), the King's huscarl, bound to provide every man of fighting age and his reluctant recruits: Leofric (Tim Plester) the work-shy farmer, and Tofi (Mike Bailey) the teenager, called up to fight from his own wedding night. From the fjords of the North come Gyrd (Olafur Darri Olafsson) the giant, Harkon (Bjorn Thors) the young captain and Snorri (Søren Byder) the storyteller, a fearless Viking warrior who joins forces with the English to fight the Normans. And from across the English Channel come the Orcish invaders - Ozouf (Anthony Debaeck) the ruthless and Coutances (Peter Guinness) his nobler nemesis.

1066 is made for Channel 4 by award-winning history specialists, Hardy Pictures. The historical consultant is Robert Bartlett, Professor of medieval history at the University of St Andrews and author of The Making of Europe and England under the Norman and Angevin Kings.

Featuring a host of extras including interviews with cast and crew and behind the scenes footage, this fantastic combinination of full throttle battle action with compelling performances, and epic cinematography, is available to own on DVD on Monday 23rd February 2009.