Killswitch - Steven Seagal is back 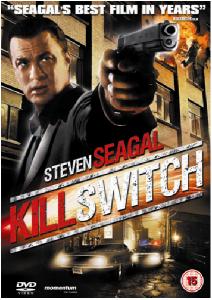 HIS WAY, HIS RULES, NO EXCEPTIONS

Actor, musician, martial artist and philanthropist, Steven Seagal is a legend in his own lifetime. Arguably the worlds most popular and successful action star, most recently he has dominated the DVD charts, and the release of Kill Switch on 23 February 2009 will undoubtedly continue this trend. Available on both the DVD and Blu-Ray formats, the explosive Kill Switch is also written by Seagal. So step aside Sylvester Stallone, Chuck Norris, Arnold Schwarzenegger, Dolph Lundgren, Jean-Claude Van Damme and Bruce Willis - Seagal is back centre stage!

Synopsis
Detective Jacob Stillwell (Steven Seagal) is one of the most celebrated homicide detectives in the country. His brutal delivery of street justice is legendary among the men and women of law enforcement. But on this latest case, he may have finally met his match - Lazerus, a cunning and perversely violent killer who is on the loose and terrorizing the inner city.